Armed Jihad: whose Responsibility, is it?  Individual or Collective Obligation?  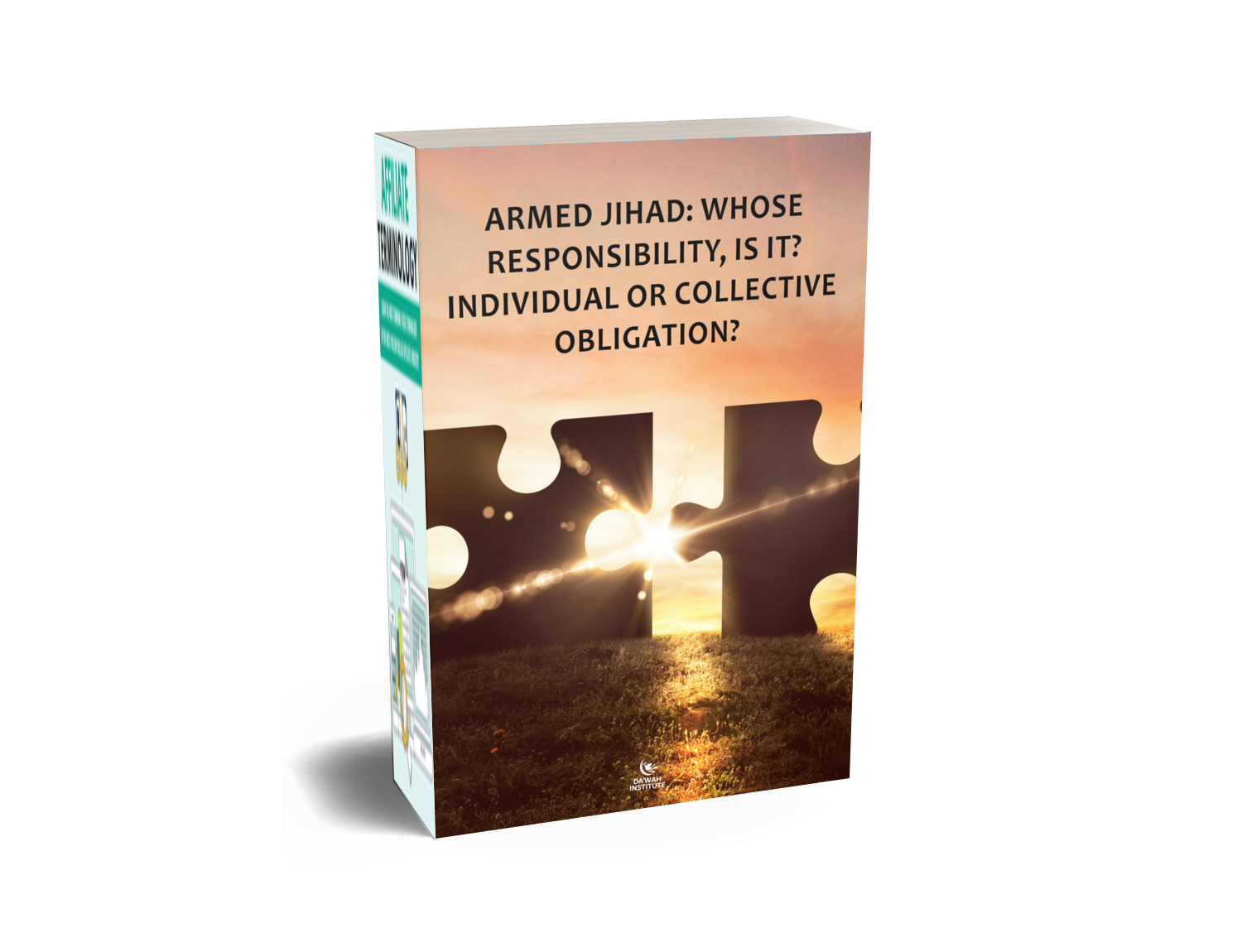 An action is described by Muslim scholars as a fardu `ayn (individual duty) when it is an obligatory responsibility for each individual adult Muslim, and he/she will be rewarded for performing it or deserving of punishment for failing to perform it.  A common example is the five daily prayers (salat) or the Ramadan fast (sawm), for which Muslims are individually held responsible.

On the other hand, a fardu kifayah (collective or societal duty) is an act that is an obligation on the Muslim community collectively. If it is adequately carried out by some members of the community, then other Muslims do not have to perform it. If nobody takes it upon himself or herself to perform the act on behalf of the community, then all Muslims (and especially their leadership) have failed, erred and are responsible (to Allah at least). A common example is the funeral or burying of the dead. It is obligatory that some attend the funeral and bury the dead, but once someone does it, others are absolved from the obligation or responsibility.[2].[3]

The various community services to society that are critical to public interest (maslahah) in preventing the society, community or a portion of it from loss of life, harm (darar), insecurity and fear (khawf), lawlessness and anarchy (fitna), corruption and destruction (fasad) are regarded as “Essential Services”. As a general rule, each of the “Essential Services” which include the military, defence and security forms of jihad is regarded as a collective obligation (fardu kifayah) which some and not all members of or professionals in the society are expected to be responsible for performing. They may, however, be regarded as individual obligations (fardu ‘ayn) when the obligation to perform such tasks are required by the leadership, when someone is the only available skilled or specialized professional for the service, or when, as in emergency situations, an essential service has to be carried out but those responsible are unable or unavailable to perform their tasks.[4] This reasoning, however, applies to the obligation for military defence forms of jihad as it does to other forms of jihad such as healthcare, firefighting and waste disposal services, etc.

Armed or military jihad, when its need arises, is regarded by Muslim scholars and schools of jurisprudence to be a collective obligation (fardu kifayah) – and not an individual obligation (fardu ‘ayn) – on the members of the Muslim community under its leadership.[5]The following are among the arguments advanced by scholars for this position:

In contemporary times, those exempted from warfare will include those responsible for essential services, which if neglected would lead to even greater suffering and insecurity.[6]

These two verses are evidence supporting the view that armed jihad is not obligatory on every individual Muslim, rather it is only obligatory on a group (usually the Defence and Security Forces) in the community. In addition, if jihad were to be obligatory on everybody, Allah would not have promised a reward or “good” (al–husna) to those who did not fight along with those who did go out to fight, as stated in Qur’an 4:95 above. Indeed, they would have been liable to punishment for staying back (at home) if joining the fighting troops was really an individual obligation (fardu ‘ayn).[7]

According to Imam al-Thawri, and as is clear from the context of these verses, fighting polytheists is not an obligation unless the initiative to fight first comes from them. If the fighting form of jihad was an individual obligation, its performance would not be dependent on or a reaction to aggression from others.[8]

The fact that the physically disadvantaged – the sick, blind, crippled, weak, elderly, etc. – and women (even if capable) are exempted from joining the fighting troops is additional evidence according to some scholars that the fighting form of jihad is not an individual obligation or responsibility on all Muslims.[9][A1]

According to the majority of scholars however, fighting or jihad could become an individual obligation (fardu ‘ayn) in the following situations:[12]

As mentioned earlier, and as applied to the other various forms of jihad, whatever is regarded under normal conditions as a societal obligation (fardu kifayah), may in special circumstances or dire necessity become treated as an individual responsibility or obligation (fardu ‘ayn) for some people.

[6] See commentary on Qur’an 9:122 in Muhammad Asad, The Message of the Qur’an, The Book Foundation, England, 2003, p.319 note 162  for the application of the wisdom of this verse to other branches of knowledge that are also a sacred obligation (fard) to acquire and apply according to the “Faith” (deen) .

[14] This is similar to the obligation of the Friday (Jumu’ah) prayer under an imam (leader).