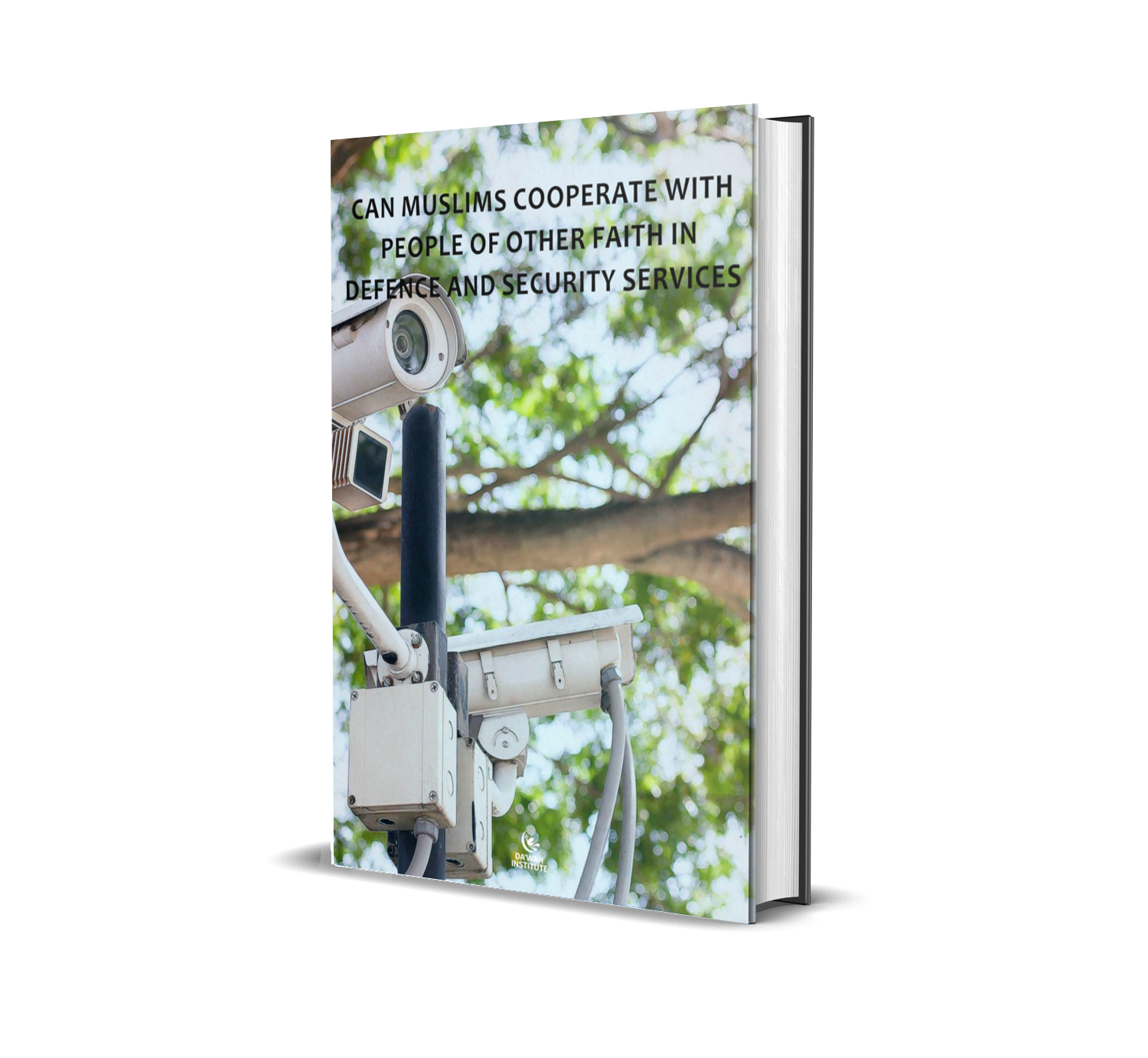 Some Muslims regard it as prohibited for Muslims to collaborate with people of other faiths in fighting against Muslim terrorists or other criminals. They also regard it as forbidden for Muslims to join the military, law enforcement and security services of non-Muslim governments, especially if such engagement could result into fighting against Muslims.

Can Muslims cooperate with people of other faith in defence and security services against criminals, terrorists, insurgents and violent or belligerent Muslims and non-Muslims?

It is permissible to fight non-Muslims if they are violent aggressors. Allah says in the Qur’an:

“Fight (qātilū, in Arabic) in the cause of God those who fight (yuqātilū) you, but do not commit aggression, for God loves not the aggressors”. (Qur’an 2:190);

“And kill them wherever you find them, and turn them out from where they have turned you out. For persecution is worse than killing. And fight not with them at al-Masjid al-Haram (the sanctuary at Mecca), unless they (first) fight you there. But if they attack you, then kill them. Such is the recompense of the disbelievers, but if they cease, then Allah is Oft-Forgiving, Most Merciful. And fight them until there is no fitnah (oppression) and religion is for Allah, but if they cease, let there be no hostility except to those who practice oppression”. (Q2:191-193);

“But if they violate their pledges after having concluded a treaty, and revile your religion, then fight against the leaders of disbelief who, behold, mean nothing by their pledges, so that they might desist.  Will you not fight against people who have violated their pledges, conspired to expel the Prophet, and were the first to attack you? Do you hold them in awe? Nay, it is Allah who you ought to stand in awe of, if you truly are believers. (Qur’an 9:12-13)

From the verses of the Qur’an cited above, the relevant hadiths on this topic, and the actual historical happenings (seerah) of the times, it can confidently be concluded that all the battles against communities belonging to other faiths by the Prophet (p) and his Companions were against their oppression, aggression and hostility.[1]

However, it is not permissible to fight non-Muslims if they are not aggressors and non-combatants. Allah says in the Qur’an, “Allah does not forbid you to deal justly and kindly with those who fought not against you on account of religion and did not drive you out of your homes. Verily, Allah loves those who deal with equity.” (Qur’an 60:8);

“And fight them until there is no fitnah (oppression) and religion is for Allah, but if they cease, let there be no hostility except to those who practice oppression”. (Qur’an 2:193);

“…and if anyone of the Mushrikun (polytheist) seeks your protection then grant him protection, so that he may hear the Word of Allah, and then escort him to where he can be secure, that is because they are men who know not”. (Qur’an 9:6)

There is in addition, the prohibition by the Prophet (p) and his Companions of killing even during warfare, those non-Muslims who were non-combatants, such as women, children, etc.[3] For example, he said, “Never kill women and children”[4], “Do not kill hermits”[5], “Do not slay the old and frail…”[6], and “Leave them (monks) and that to which they devote themselves.”[7] To this list, scholars add other non-combatants such as the blind, chronically ill, clergy, traders, craftsmen, farmers, the insane, peasants, serfs, etc.[8] Others who can be safely included are those with amnesty or peace treaties (mu’ahid and dhimmis), Emissaries and Diplomats, etc.[9]

All these prove that it is not permissible for Muslims to fight non-Muslims unless they are violent aggressors and combatants.

Regarding fighting fellow Muslims (as seen during the period of the Companions against the Khawarij and in some of the other civil wars) it is permissible for Muslims to fight other belligerent Muslims if these are also violent aggressors.[10]

Allah says in (Qur’an 49:9) “And if two parties or groups among the believers fall to fighting, then make peace between them both, but if one of them rebels against the other, then fight you (all) against the one which rebels till it complies with the Command of Allah; then if it complies, then make reconciliation between them justly, and be equitable. Verily! Allah loves those who are equitable”.

In addition, all criminal punishments on Muslim individuals or groups – such as murder,[11] theft,[12] armed robbery (hirabah),[13] adultery,[14] etc. – are punished in Islamic law because of the wrongs they commit even though they are Muslims.

However, it is not permissible to fight Muslims if they are not violent aggressors. Allah says in the Qur’an, “And whoever kills a believer intentionally, his recompense is Hell to abide therein, and the Wrath and the Curse of Allah are upon him, and a great punishment is prepared for him.”  (Qur’an 4:93).[15]

Muslims must stand for justice against anyone and everyone irrespective of their relationship with them – whether Muslims or otherwise. Allah says:

“O you who have attained to faith! Be ever steadfast in your devotion to God, bearing witness to the truth in all equity; and never let hatred of anyone lead you into the sin of deviating from justice. Be just; this is closest to being God-conscious. And remain conscious of God; verily, God is aware of all that you do.” (Qur’an 5:8)

“O you who have attained to faith! Be ever steadfast in upholding equity, bearing witness to the truth for the sake of God, even though it be against your own selves, or your parents and kinsfolk. Whether the person concerned be rich or poor, God’s claim takes precedence over (the claims of) either of them. Do not, then, follow your own desires, lest you swerve from justice; for if you distort (the truth), behold, God is indeed aware of all that you do!” (Qur’an 4:135)[16]

The means and ends of fighting should always respect Allah’s guidance – fi sabilillah- and be in His Cause of justice. There should also be no justification for abandoning proportionality and justice during a conflict, as the Qur’an forbids that a person should hurt others more than they were hurt.[17]

Allah says in the Qur’an, “And if you have to respond to an attack, respond only to the extent of the attack levelled against you; but to bear with patience is indeed far better for you, (since God is with) those who are patient in adversity.” (Qur’an 16:126)

Muslims are also permitted to form alliances with people of other faiths for their mutual safety and security. Many such treaties were entered into during the life of the Prophet (p) and his Companions with Polytheists, Jews, Christians, Zoroastrians (Majus), etc.[18]

It is permissible for a Muslim to fight to defend a community of non-Muslims with whom they have a treaty of mutual safety and security. This security was part of the contract for Ahl al-Dhimmah (Protected non-Muslim citizens) and was observed by the Prophet (p).

During the early period of the Prophet’s (p) stay in Medina, there was a document or agreement that was signed between the various Muslim and Jewish clans and communities there. This document was referred to as the Sahifah (document) and it was the “constitution” of Medina. The 24th Clause of the document states that “The Jews will contribute to the cost of war as long as they are fighting alongside the believers”. The 37th Clause of the Sahifah states that, “The Jews must bear their expenses and the Muslims their expenses. Each must help the other against anyone who attacks the People of this Document. They must seek mutual advice and consultation, and righteousness is a protection against sinfulness.”[19]

According to Ibn Hazm (995-1063 CE), a classical jurist of Islam, “If we are attacked by an enemy nation who is targeting the People of the Covenant (non-Muslim citizens) living among us, it is our duty to come fully armed and ready to die in battle for them, to protect those people who are protected by the covenant of God and His Messenger. Doing any less and surrendering them (to an enemy) will be blameworthy neglect of a sacred promise.”[20]

Non-Muslims who have treaties with Muslims are allowed to cooperate and if necessary to fight alongside Muslims for their mutual safety and security. Jubair bin Nufair reported that the Messenger of Allah said: “You will make a peace-treaty with the Romans and together you will invade an enemy beyond Rome. You will be victorious and take much booty.”[21] Some members of the polytheist tribe of Banu Khuza’ acted as spies or military scouts for the Prophet (p).[22] Military service with Muslims was a reason for exemption of non-Muslim citizens from paying the Jizya (poll tax or tribute) to the Islamic government.[23]

Muslims are therefore not prohibited from cooperating with non-Muslims in fighting injustice and aggression. Muslims are also not prohibited from collaborating with or joining non-Muslim security personnel or armed forces (and vice-versa) if the target of fighting is just and against aggression, and if its means and the conduct of warfare do not contradict Shari’ah teachings.

If however, the purpose of fighting others is against justice and contrary to the objectives (maqasid) of Shari’ah and maslahah (public interest), then it is prohibited for a Muslim to cooperate with any such security services or armed forces whether these are led by Muslims or non-Muslims.

Allah reminds us, “O you who have attained to faith! Be ever steadfast in upholding equity, bearing witness to the truth for the sake of God, even though it be against your own selves, or your parents and kinsfolk. Whether the person concerned be rich or poor, God’s claim takes precedence over (the claims of) either of them. Do not, then, follow your own desires, lest you swerve from justice; for if you distort (the truth), behold, God is indeed aware of all that you do!” (Qur’an 4:135)