CONCEPT OF AL-WALA’ AND AL-BARA’ 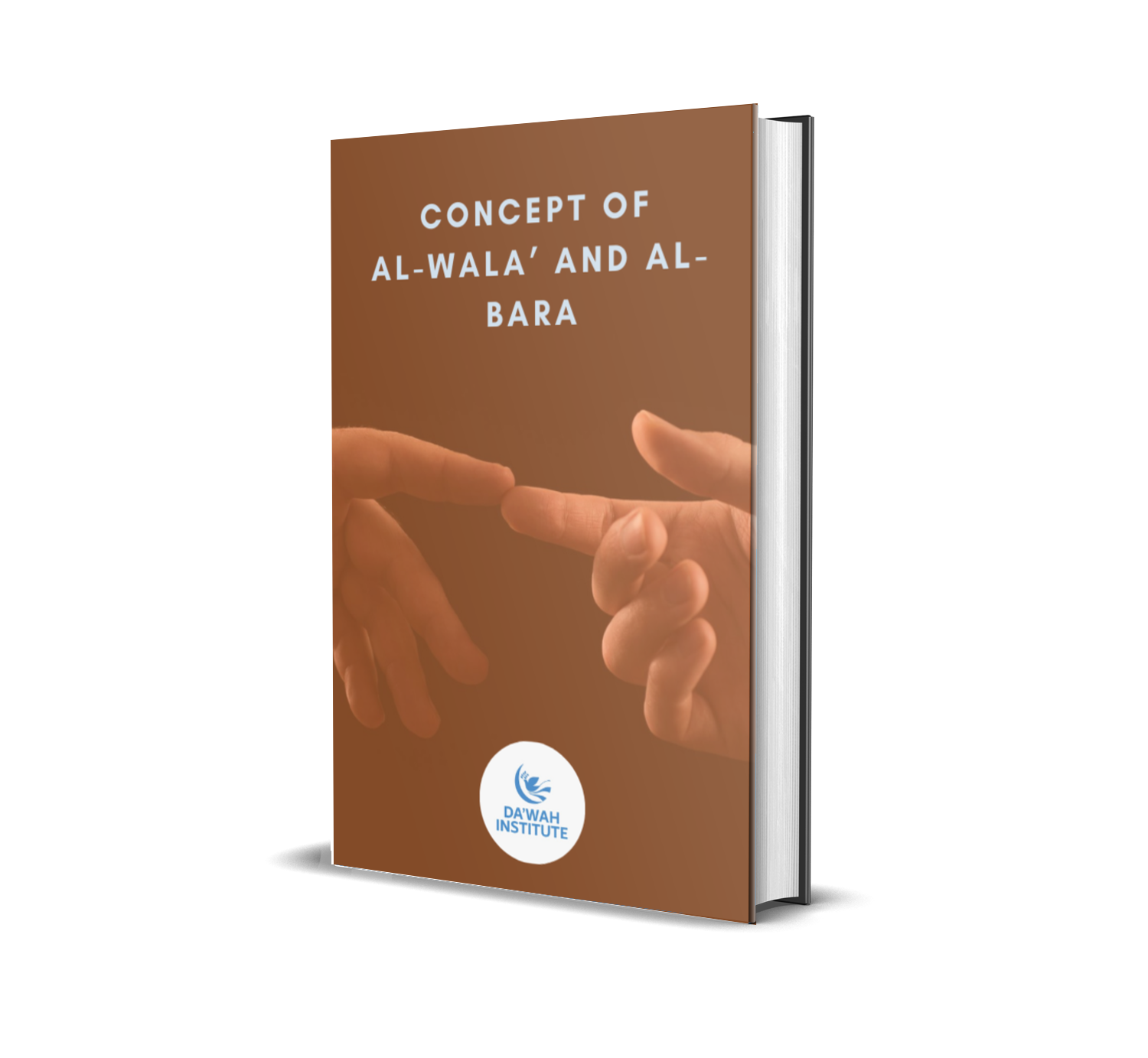 This section gives the definitions of the terms al-wala’ and al-bara’, as well as the various forms of both.

Some Muslims understand interfaith relations as summarized and restricted by the notions of either one of “loyalty and allegiance” (al–wala’) or of “dissociation and disavowal” (al–bara’), with little or no regard to other Islamic concepts such as kindness, compassion, fairness and justice. What actually is the correct meaning of Al-Wala’ (loyalty) and Al-Bara’ (dissociation)?

The technical meaning of al-Wala’ is to totally agree with the sayings, deeds and beliefs which please Allah and the persons whom He likes.[2]  It is to love what Allah loves and to be loyal to what Allah approves of. The concept of al-Wala’ therefore does not contradict or go against justice (qist), kindness (birr), mercy (rahmah) and excellence (ihsan) towards others irrespective of religious affiliation.

The concept of Al-Bara’:

Al-Bara’ is to disavow, dislike and disagree with everything that Allah hates and condemns.[3] The concept of al-Bara’ however does not imply injustice, cruelty or any other unethical or inhumane behaviours which are not acceptable even towards an enemy of Allah or something that Allah hates. It also does not imply that Muslims cannot forgive their enemies and those who do wrong to them from among non-Muslims, as can be seen from the Sunnah of the Prophet (p) towards his enemies and the enemies of Allah.

Interfaith relations are not defined by only Wala’ (loyalty) and Bara’ (disassociation), but also by Birr (kindness), Qist (justice) and Ihsan (goodness). Allah says:

“As for such (of the unbelievers) who do not fight against you on account of (your) faith, and neither drive you forth from your homelands, God does not forbid you to show them kindness (birr) and to behave towards them with full equity (qist): for verily, God loves those who act equitably. God only forbids you to turn in friendship towards such as fight against you because of (your) faith, and drive you forth from your homelands, or aid (others) in driving you forth: and as for those (from among you) who turn toward them in friendship (wala’), it is they, they who are truly wrongdoers!” (Qur’an 60: 8-9)

Ibn Qayyim al-Jawziyyah says, “This verse permits association with those who have not declared war against the Muslims and allows kindness towards them, even though they may not be allies.”[4]

In his Tafsir (commentary) on Qur’an 60:8, Imam Al-Qurtubi said:

“The majority of commentators have agreed that this verse has not been abrogated. They cited the story reported by Al-Bukhari and Muslim about Asmā’ bint Abubakr when she asked the Prophet (p) if she could receive and be kind to her non-Muslim mother who visited her in Madina and the Prophet (p) said ‘Yes’. It was said that this verse was revealed in this specific incident. Al-Mawardi and Abu Dawood reported that Amir ibn Abdullah ibn Al-Zubair narrated that his father told him that, before accepting Islam, Abubakr divorced his wife Qatila, the mother of Asmā’.  When the truce was held between the Prophet (p) and the polytheists of the Quraish, the mother visited her daughter in Madina and brought her a pair of earrings and other gifts.  Asmā’ was reluctant to accept the gifts before asking the Prophet (p).  In answer to her question, Allah revealed this verse [i.e. Qur’an 60:8].”[5]

Similarly, Allah encourages justice (‘adl and qist) – even to an enemy. He says: “Do not let hatred of any people cause you to swerve from justice. Be just: this is nearest to being God-conscious” (Qur’an 5:8). Also, “O you who have attained to faith! Be ever steadfast in upholding equity, bearing witness to the truth for the sake of God, even though it be against your own selves, or your parents and kinsfolk. Whether the person concerned be rich or poor, God’s claim takes precedence over (the claims of) either of them. Do not, then, follow your own desires, lest you swerve from justice; for if you distort (the truth), behold, God is indeed aware of all that you do!” (Qur’an 4:135).

Also, Allah encourages forgiveness and returning evil with good. He says: “Repel by (means of) what is best, (their) evils. We are most knowing of what you describe.” (Qur’an 23:96) Following this Qur’anic injunction, forgiveness was exemplified by Prophet Muhammad (p) in many difficult situations such as forgiveness of war crimes by the Quraish after the conquest of Mecca;[6] and the forgiveness of the people of Ta’if when he went there to preach the message of Islam but instead of appreciating him, they stoned him.[7] He also overlooked the ill behaviour of Jews (i.e. Banu Qaynuqa and Banu Nadhir) in Medina, before he expelled them after their betrayal.[8]

More textual evidences showing what the concept of ‘al-Bara’ is not:

Major Qur’anic commentators cite the context of the revelation of this verse as being related to the Prophet’s polytheist uncle Abu Talib[15] who supported him and whom he loved dearly but could not convince to become a Muslim, as evident in the narration below:

Sa’id bin Al-Musayyib[16] narrated from his father, “When the time of the death of Abu Talib approached, Allah’s Apostle (p) went to him and found Abu Jahl bin Hisham and ‘Abdullah bin Abi Umayyah bin Al-Mughira by his side. Allah’s Apostle (p) said to Abu Talib, “O uncle! Say: None has the right to be worshipped but Allah, a sentence with which I shall be a witness (i.e. argue) for you before Allah. Abu Jahl and ‘Abdullah bin Abi Umaiya said, “O Abu Talib! Are you going to denounce the religion of Abdul Muttalib?” Allah’s Apostlee (p) kept on inviting Abu Talib to say it (i.e. ‘None has the right to be worshipped but Allah’) while they (Abu Jahl and Abdullah) kept on repeating their statement till Abu Talib said as his last statement that he was on the religion of Abdul Muttalib and refused to say, ‘None has the right to be worshipped but Allah.’ Then Allah’s Apostle (p) said, “I will keep on asking Allah’s forgiveness for you unless I am forbidden (by Allah) to do so.” So Allah revealed (the verse) concerning him: “It is not fitting for the Prophet and those who believe that they should invoke (Allah) for forgiveness for polytheists even though they be of kin, after it has become clear to them that they are companions of the fire (Qur’an 9:113).[17]

The verse (28:56) is therefore a clear indication of the fact that the Prophet Muhammad (p) loved a polytheist who refused to accept Islam. This is a proof that non-Muslims are among those whom Muslims may love and hold close relationships with.[18]

In a hadith narrated by Anas bin Malik, “A Jewish lady brought a poisoned (cooked) sheep for the Prophet (p) who ate from it. She was brought to the Prophet (p) and he was asked, “Shall we kill her?” He said, “No.” I continued to see the effect of the poison on the palate of the mouth of Allah’s Apostle (p).”[19]

Prohibited and Permissible forms of Al-Wala’

Some forms of Al–wala’ could be prohibited, for example, helping non-Muslims in any way that could be unjustly harmful to Muslims or others. It could also be permissible such as when it comes in the form of kindness to those who are not hostile among them; for example, marrying kitabiyyah wives (from the “People of the Book”), eating their foods, greeting them, giving them gift, etc.[26] The case of Asma’ bint Abu Bakr and her mother as cited earlier on is a good example of acceptable al-wala’, so also is the Prophet’s relationship with his uncle and that of the Muslim emigrants with the Christian Negus of Habashah (Abyssinia).

Also, marrying a kitabiya and the ensuing love between the Muslim husband and the non-Muslim wife naturally leads to mawaddah (love), rahmah (mercy), sakinah (tranquillity), hubb (love), trust, etc. and does not contradict the concept of al–wala’.

[11] Many lessons have been derived by Muslim Scholars from the treaty of Hudaibiyah between the Muslims of Media and the Polytheists of Mecca. These lessons are relevant to Muslim minorities living under non-Muslim rule, treaties and constitutional concessions, the priority of peaceful co-existence etc. For further reading, see: Ibn Hisham, al-Sirah al-Nabawiyyah, Dar al-Qalam, Beirut, vol.1, pp. 321-336; Ibn Kathir, al-Bidayah wa al-Nihayah, Maktabat al-Ma’arif, Beirut, vol. 1, pp. 164 – 177; Adil Salahi, Muhammad, Man and Prophet: A Complete Study of the Life of the Prophet of Islam, The Islamic Foundation, Markfield, UK, 2002, pp. 495-530; Tariq Ramadan, In the Footsteps of the Prophet, Oxford University Press, New York, 2007, pp. 149 – 163.

[16] Also referred to by some as Sa’id bin Al-Musayyab.

« Fairness to Enemy in Islam
IDENTITY AND NAMES »