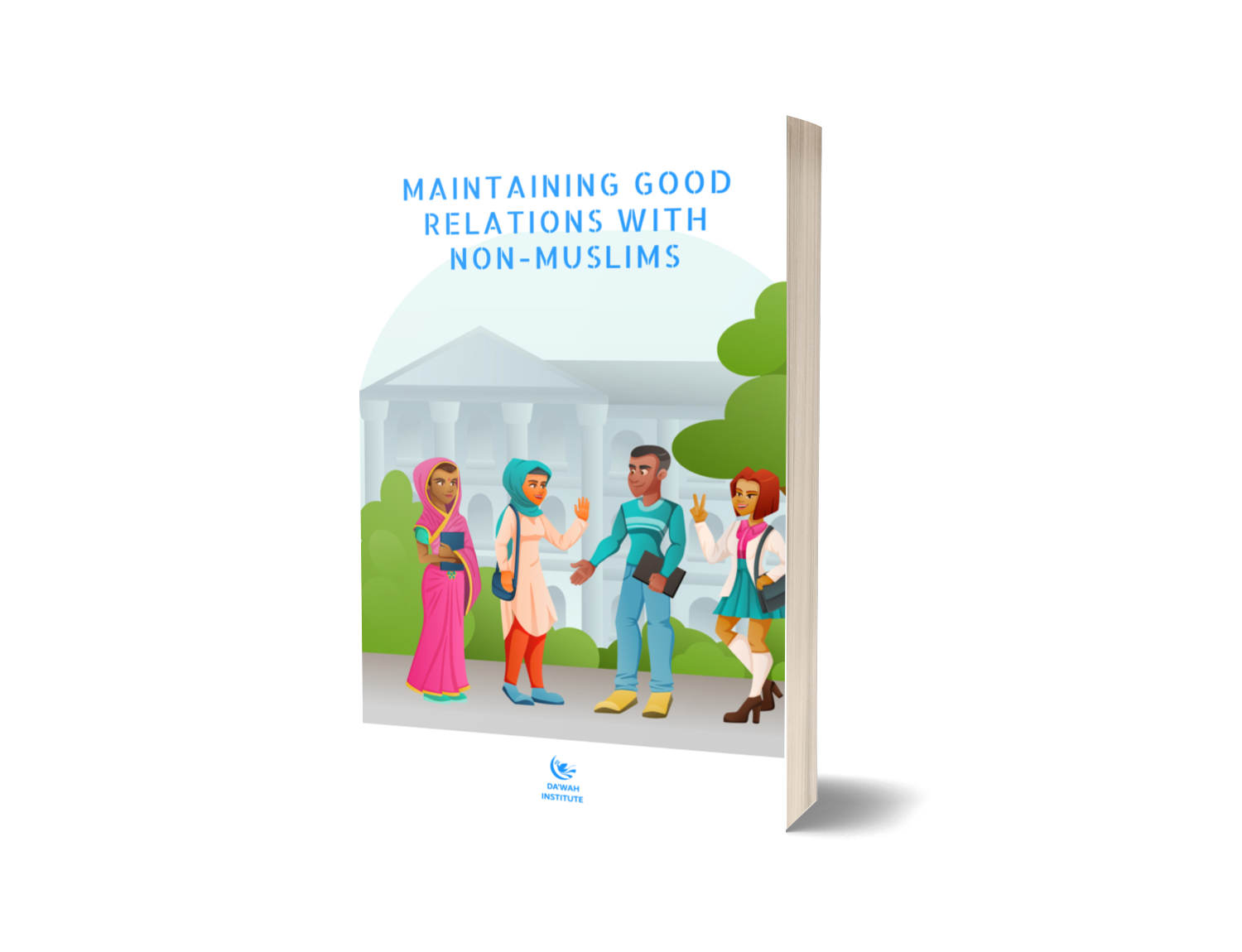 This section highlights narratives and instances during the lifetime of the Prophet (p) which shows that Islam not only permits, but even encourages keeping good relations with people of other faiths who are not hostile or oppressive to Muslims.

The Prophet’s (p) Character as Testified by Non-Muslims

Prophet Muhammad (p), who is the most important role model (uswatun hasanah)[1] for all Muslims, was so well known for his truthfulness, integrity, honesty and fairness in his business dealings and other interactions with the polytheists of Mecca, that they even nicknamed him “Al-Ameen” (meaning the “Trustworthy” or “Honest one”). This began even before his call to prophethood, and remained till the end.[2]

As a result of the persecution of Muslims in Mecca and the threats to his life by the polytheist Quraysh, the Prophet (p) and some of his companions had to escape and migrate (Hijrah) from Mecca to Medina.  Before he left, the Prophet (p) instructed Ali to stay behind in order to return all the trusts kept with him, after which he (Ali) would join them in Medina.[3]

Immediately after the Prophet (p) received the first revelation of the Qur’an in Cave Hira’, he ran home terrified to his wife Khadijah bint Khuwaylid, saying “Cover me up! Cover me up!” After informing his wife of his experience and expressing his fears, she comforted him with words that testified to his good treatment of all his community members, regardless of their belief, tribe or social standing.

She said, “Allah will never forsake you, for you maintain the ties of kinship, you are true to your word, you bear the burdens of the weak, you give to people what no one else is able to give (in terms of benefits and good manners), you hospitably entertain your guests, and you help people who are afflicted with calamities.”[4]

“It is not righteousness (al-birr) that you turn your faces towards east and (or) west (in prayers); but righteousness (al-birr) is (the quality of) the one who believes in Allah, the Last Day, the Angels, the Book, the Prophets and gives his wealth, in spite of love for it, to the kinsfolk, to the orphans, and to the poor (al-masakin), and to the wayfarer, and to those who ask, and to set slaves free, performs the prayer (al-salat), and gives the charity (zakat), and who fulfil their pledges (‘uqud) when they make them, and who are patient in misfortune and hardship, and in time of peril. Such are the people of the truth and they are the pious (al-muttaqun).” (Qur’an 2:177)

“Verily! Allah commands that you should render back the trusts to those to whom they are due; and that when you judge between people, you judge with justice. Verily, how excellent is the teaching which He (Allah) gives you! Truly, Allah is Ever All-Hearer, All-Seer.” (Qur’an 4:58)

“O you who have believed, be persistently standing firm for Allah, witnesses in justice, and do not let the hatred of a people prevent you from being just. Be just; that is nearer to righteousness. And fear Allah; indeed, Allah is acquainted with what you do.” (Qur’an 5:8)

The fact that the polytheists of Mecca were keeping their belongings with the Prophet (p), despite their enmity towards him and their plot to kill him, has shown that the enemies knew in their minds that he is an upright and  trustworthy person. It equally shows that they believe that he is better than them. However, blind imitation, dogmatism and being adamantly tied to their culture and wrong beliefs made them wage war against him and even plot to assassinate him.[8]

That the Prophet Muhammad (p) was referred to as Al-Ameen by non-Muslims of Mecca has great implications to our character and interfaith relations. It requires that we ask, “What forms of goodness and virtues would a Muslim have to exhibit towards his or her non-Muslim community, following the example of the Prophet (p), in order to be recognised and if possible given a virtuous title or nickname, as was done by the polytheists of Mecca for the Prophet Muhammad (p)?”

Also, that the Prophet (p) returned to the Quraysh their properties, despite their persecution which led to his having to leave his homeland in the first place, shows that Muslims are expected to uphold trusts given to them, even by hostile non-Muslims.

Similarly, the description by Khadijah of the Prophet’s behaviour towards the non-Muslim members of his community shows that he was of outstanding character even before prophethood. As would be shown later, these virtues did not decrease, but in fact, increased after prophethood, and even when the Prophet (p) gained power over them.

Thus, it can be inferred from the Prophet’s actions that a Muslim should be an icon of honesty and fairness to everyone, and at all times. How could anyone then claim that it is islamically permissible for Muslims to behave towards people of other faiths dishonestly, unjustly or exploitatively, if the Prophet (p) – who understood Islam better than anyone else – modelled hospitality, kindness, trustworthiness, honesty and truthfulness at all times, and to all people?