Sanctity of Every Human Life 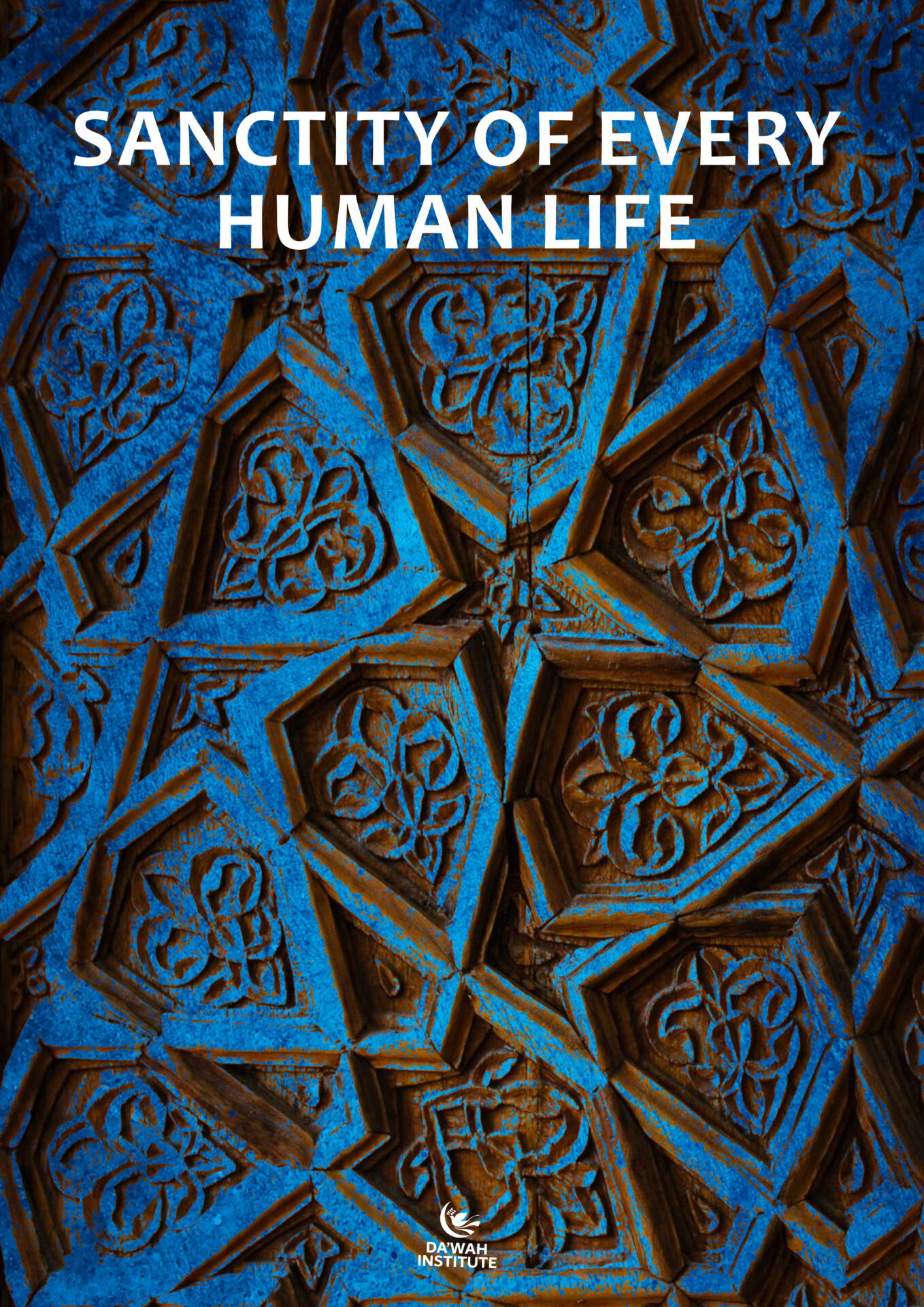 Some think that the life of a Muslim is more sacred than that of a non-Muslim, and that Islamic law does not offer the same level of protection to people of other faiths as it does to Muslims. They believe or suspect that Islam has little respect for the lives of people of other faiths and discriminates against them, regarding Muslims as being inherently superior people and whose lives are more valuable than others.

What do Islamic texts have to say on the sanctity of human life, irrespective of faith?

The Qur’an teaches that every human being has a special place in Allah’s creation irrespective of what faith or belief an individual chooses to profess. Allah says: “And we have certainly honoured the sons of Adam; provided them with transport on land and sea; given them for sustenance things good and pure; and conferred on them special favours, above a great part of our creation.” (Qur’an 17:70)

Not only are all humans children of Adam to whom Allah commanded the Angels to bow (Qur’an 2:34), but each human has a spirit Allah breathed into him or her. Allah says “…and then He forms him in accordance with what he is meant to be, and breathes into him of His spirit.” (Qur’an 32:7-9). Thus, every human is a spiritual being living in a physical or earthly body.

While repeating in the Qur’an what was revealed in earlier revelations, Allah clearly describes the importance and sacredness of the life of every human being, and says,

Every human irrespective of their faith, social standing or gender is a spiritual being whose life is sacred; thus, harming or taking it unjustly is a great sin and crime that is punishable by death, irrespective of the murdered person’s religious identity.

The equality of human life irrespective of faith, ethnicity, race or gender, etc. is clear from the equal regard the Qur’an and authentic Sunnah give to the punishment or “equitable retribution” (qisas) and recompense (diyyah) for taking of innocent life, whether murder or manslaughter, etc.

“We have prescribed therein for them (the Children of Israel); a life for a life, an eye for an eye, nose for nose, ear for ear, tooth for tooth …” To prevent any confusion about the implication to Muslims of this Qur’anic verse, the respected Companion of the Prophet (p) Ibn Al-Musayyab is reported as having said regarding this particular verse, that “this verse is for us (Muslims) and for them (Jews).”[1] In other words, this verse applies to Muslims, and it does not make any distinction regarding the value of one life over another based on religion.

“O you who have attained to faith! Just retribution (qisas) is ordained for you in cases of killing: the free for the free, and the slave for the slave, and the woman for the woman. And if something [of his guilt] is remitted to a guilty person by his brother, this [remission] shall be adhered to with fairness, and restitution to his fellow-man shall be made in a goodly manner.” (Qur’an 2:178)

In his commentary on this verse, Muhammad Asad says,

“As for the term qisas occurring at the beginning of the above passage, it must be pointed out that – according to all the classical commentators – it is almost synonymous with musawah, i.e., “making a thing equal [to another thing]”: in this instance, making the punishment equal (or appropriate) to the crime – a meaning which is best rendered as “just retribution” and not (as has been often, and erroneously, done) as “retaliation”. Seeing that the Qur’an speaks here of “cases of killing” (fi’l-qatla, lit., “in the matter of the killed”) in general, and taking into account that this expression covers all possible cases of homicide – premeditated murder, murder under extreme provocation, culpable homicide, accidental manslaughter, and so forth – it is obvious that the taking of a life for a life (implied in the term “retaliation”) would not in every case correspond to the demands of equity. (This has been made clear, for instance, in Qur’an 4:92, where legal restitution for unintentional homicide is dealt with.) Read in conjunction with the term “just retribution” which introduces this passage, it is clear that the stipulation “the free for the free, the slave for the slave, the woman for the woman” cannot – and has not been intended to – be taken in its literal, restrictive sense: for this would preclude its application to many cases of homicide, e.g., the killing of a free man by a slave, or of a woman by a man, or vice-versa. Thus, the above stipulation must be regarded as an example of the elliptical mode of expression (ijaz) so frequently employed in the Qur’an, and can have but one meaning, namely: “if a free man has committed the crime, the free man must be punished; if a slave has committed the crime…”, etc. – in other words, whatever the status of the guilty person, he or she (and he or she alone) is to be punished in a manner appropriate to the crime.”[2]

This verse is therefore general in its import and makes no distinction regarding the value of the lives of people based on religion.

“And take not the life which Allah has made sacred, unless it be in the cause of justice. Whoever is killed unjustly, We have appointed to his next-of-kin authority; but let him not exceed in slaying. He (the near kin) will certainly be helped (to seek redress).”  This verse again makes no distinction regarding the value of one person’s life over another based on religion, class or gender, etc.

“And it is not conceivable that a believer should slay another believer, unless it be by mistake. And upon him who has slain a believer by mistake there is the duty of freeing a believing soul from bondage and paying an indemnity (diyya) to the victim’s relations, unless they forgo it by way of charity. Now if the slain, while himself a believer, belonged to a people who are at war with you, [the penance shall be confined to] the freeing of a believing soul from bondage; whereas, if he (the victim) belonged to a people to whom you are bound by a covenant, [it shall consist of] an indemnity (diyya) to be paid to his relations in addition to the freeing of a believing soul from bondage. And he who does not have the wherewithal shall fast [instead] for two consecutive months. (This is) the atonement ordained by God: and God is indeed all-knowing, wise.”

This verse treats 3 distinct cases. The first and earlier part of the verse that reads, “…upon him who has slain a believer by mistake…”refers to the case of a Muslim victim and what the prescribed punishment or atonement is for such manslaughter.

The second case mentioned in the middle of the verse – “the slain, while himself a believer, belonged to a people who are at war with you” – deals with a Muslim victim who was living among those non-Muslims who are hostile or at war with the Muslim community.

The third case in the latter part of the verse reads, “…if he (the victim) belonged to a people to whom you are bound by a covenant …”, and refers to a non-Muslim victim who is a member of a community that has a peace treaty or covenant with Muslims. According to Asad, “This relates to cases where the victim is a non-Muslim belonging to a people with whom the Muslims have normal, peaceful relations; in such cases, the penalty is the same as that imposed for the killing, under similar circumstances, of a fellow-believer.”[3]

All these verses are very clear and general in their import, making no distinction between human beings based on gender, religion, age, ethnicity, class or social status. No verse in the Qur’an regards the life of any innocent citizen more sacred or valuable in the consideration of Islamic law than another based on religious difference.

In the hadith of the Prophet (p), he is reliably reported to have made some general statements regarding the sin and punishment for murder without discrimination based on the religion of the victim.

The Messenger of Allah was asked about the gravest of all sins (al-kaba’ir), and he said, “To join partners in worship with Allah, to slay a soul (which Allah has forbidden), and to be unkind to one’s parents…”[4]

In another hadith, Aisha, the wife of the Prophet (p) is reported to have said that the Prophet (p) said, “The blood of a Muslim who confesses that there is no god but Allah and that I am the messenger of Allah, cannot be shed except in three cases: a married person who commits illegal sexual intercourse, for he shall be stoned to death, and a man who leaves Islam and engages in fighting against Allah and His Prophet, for he shall be executed, crucified or exiled, or one who kills, for which he shall be killed (too).”[5]

In another version of the same hadith, Abdullah bin Mas’ud said: “The Prophet (p) said, “The blood of a Muslim who confesses that there is no god but Allah and that I am the Messenger of Allah, cannot be shed except in three cases: a life for life, a married person who commits illegal sexual intercourse, and the one who turns renegade from Islam (i.e. one who apostatises) and leaves the community of Muslims.”[6]

In both these hadiths, scholars have concluded that a Muslim may be killed if he commits murder (or adultery), and these hadiths make no distinction regarding the religion of the victim (or partner in the case of adultery). They make it explicitly clear as do all the related verses of the Qur’an on this issue, that the Muslim killer is also liable to be killed in just retribution (qisas).[7]

Similarly, the criteria for a decision on the punishment in Islamic law in the case of theft, robbery, injury, etc., does not regard as relevant the religion, class or gender of the victim of the crime in deciding the punishment to the guilty Muslim.[8] A Muslim, therefore, does not get a lesser punishment because he/she stole or injured a fellow non-Muslim citizen. It, therefore, stands to reason that taking the life of a non-Muslim would not incur a lesser punishment when compared to taking the life of a fellow Muslim citizen.

From the clear and explicit texts of the Qur’an and Sunnah, the life of every human being is sacred and should be equal in the eyes of the law, irrespective of a difference in religion and gender, etc. [9]

[9] Some hadiths that have generated controversy and divergent opinions among scholars include one where the Prophet (p) is reported to have said, “… that no Muslim should be killed (in retaliation – qisas) for killing a disbeliever (kafir).” (Sahih al-Bukhari, vol.9, hadith no. 50 in Alim 6.0 and vol.4, p.326-327). Another hadith states, “The blood money of an unbeliever (kafir) is half that of a Muslim” (Ahmad bin Hanbal, Musnad, vol.2, p.180). Scholars have differed on whether the term “kafir” (disbeliever) in the context of both hadiths refers to all non-Muslims including citizens under covenant and state protection (Ahl al-Dhimma), or only to hostile and warring (kafir haribi) people of other faiths. This controversy is discussed later in this material along with some other commonly misinterpreted hadiths and verses of the Qur’an associated with interfaith relations and jihad.

« Should Muslim destroy non-Muslim place of worship
Should a Muslim have business transactions with people of other faiths? »