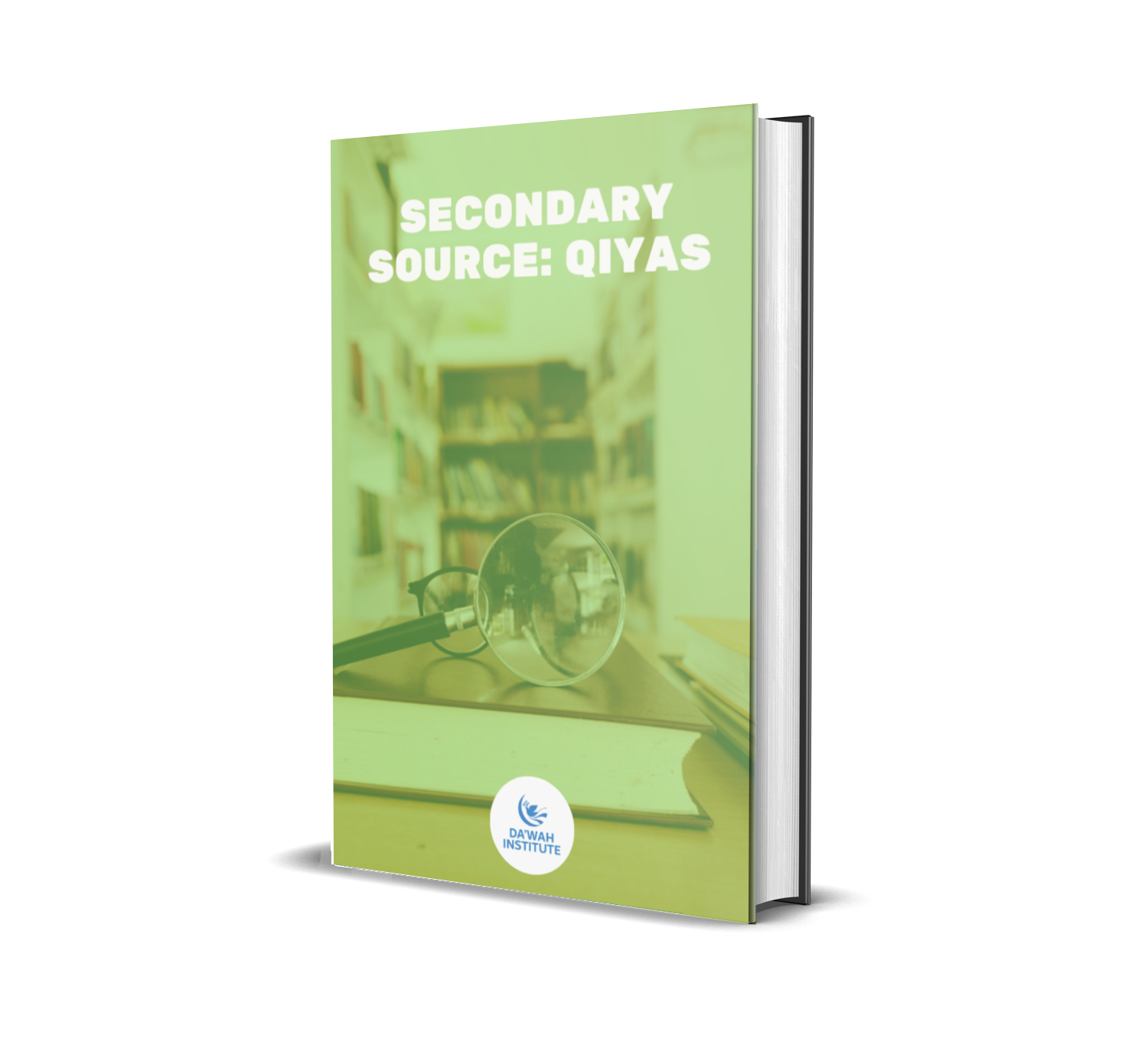 Another secondary source of evidence or tool is Qiyas: analogical reasoning or deduction. This is the practice of basing a new legal ruling on a previous ruling concerning a similar case, given the similarity between the two cases with respect to their underlying basis or occasion. The tool of qiyas identifies a reason (‘illah) evident in the text, or underlying wisdom (hikma) in a previous ruling and then applies it to a related issue.[1] Qiyas also refers to the “application of general rules to particular cases.”[2] Since each particular case is new, the crucial question is whether the unassimilated particular case actually falls under the relevant general rule or whether there is some reason to limit its application in the specific new case.[3] Consequently, reasoning by analogy is actually a method or process of juridical decision-making and reasoning, rather than a ‘source’ of legislation in the strict sense of the meaning.

Analogy (qiyas) is the only form of reason-based legal argumentation (or rational method of ijtihad) accepted by all major Sunni schools that could boast of anything approaching consensus.[4] Each of the 4 major Sunni jurists – Abu Hanifah, Malik, Shafi’i, and Ibn Hanbal – issued legal rulings based on it. Analogy however did not enjoy total consensus as the jurists differed in their methods of applying it, and the restrictions they were willing to use to curtail its strict application.[5]

Scholars differ with regard to the types, condition and the binding nature of qiyas.[6] They generally do not approve of qiyas being applied to issues related to creed (aqidah) and prescribed devotional acts or rituals (ibadah),[7] and they do not regard one who rejects qiyas as a disbeliever. They sometimes differ on what the effective cause (‘illah) or underlying wisdom (hikma) is, and its use when applying qiyas.[8]

An area of concern for scholars is the fact that the use of analogy (qiyas) – and the identification of the illah or hikmah – often implied some degree of conjecture in the implication (zanni dilalah). Its use on the basis of solitary hadith (ahad) or any other source of Shari’ah that was already speculative or presumptive in authenticity or credibility (zanni al-thubut), only increased the degree of conjecture (zanni) involved in arriving at a legal ruling or verdict. Various conditions and restrictions were therefore attached to the use of analogy (qiyas) so as to reduce the level of speculation or uncertainty involved.[9]

Scholars often rely on the following verse and authentic traditions for the authority of qiyas:

Ibn Uthaymeen comments on the above verse, that the “balance” (mizan) is what is used for measurement and comparison. He further said it implies the validity of analogical deduction (qiyas).[10]

Ibn Abbas (may Allah be pleased with him) reported: “A woman came to the Messenger of Allah (may peace be upon him) and said,‘My mother has died, and a month’s fasting is due from her.’ Thereupon he said, ‘Don’t you see that if a debt was due from her, you would have to pay it?’ She said, ‘Yes (I would pay it on her behalf).’ Thereupon he said, ‘The debt of Allah deserves its payment even more (than the payment of anyone else).’”[11]

Abu Hurairah (may Allah be pleased with him) narrated: “A man said, ‘O Allah’s Messenger, my wife has given birth to a black son.’ The Prophet said, ‘Have you any camels?’ He replied, ‘Yes!’ He asked what their colour was. The man replied, ‘They are red.’ He asked, ‘Is there a grey one among them?’ He replied, ‘Yes,’ then asked, ‘Is it perhaps a strain which it has inherited? ‘The Prophet then said (to the man), ‘It is perhaps a strain to which this son of yours has inherited.’[12]

Examples of laws established on the application of qiyas are the prohibition of narcotics based on the analogy with intoxicating alcohol; or that dog saliva is impure and spoils prayer based on the fact that a hadith requires that a bowl from which a dog drinks should be washed 7 times; and that a killer will not inherit from a will (wasiyyah) even though the hadith only says s/he cannot automatically inherit (mirath) where there is no will.[13]

In order to draw a clearer line between the Sunnah and Qiyas, and so that it does not impinge or encroach upon the Sunnah, even when it appeared clear enough that its use was legitimate and even “a good Sunnah”, scholars such as Ibn Hanbal declared that “There is no qiyas in the Sunnah, and examples are not to be made up for it” (wa laysa fi al-sunnah qiyas, wa la yudrab laha al-amthal).[14]

According to Auda, a number of respected Sunni jurists expressed uneasiness about the level of “certainty” of determining the ‘illah, and the consequential deductions from its application. Jurists such as Imam Al-Ghazali who accepts the use of qiyas (reasoning by analogy), gave six reasons for the existence of a level of “probability” (ihtimal) in the determination of the ‘illah of a certain ruling:[15]

For the above reasons, qiyas (reasoning by analogy) is better categorized amongst “presumptive” and “uncertain” (zanni), rather than “certain” (qat’i) evidences and “sources of law”. This also underscores the need to support the use of qiyas with other tools and “sources” such as maslahah (public benefits) and istihsan (juristic discretion or equity), etc. It is at least important to ensure that the use of qiyas does not produce rulings that contradict these other ‘sources’ of law, or the more certain text-supported objectives (maqasid) of Shari’ah.

Ahmad Ibn Hanbal had recourse to the most extensive number of texts of any Sunni Imam, and only resorted to analogy when he had exhausted his textual references and failed to find a relevant precedent in any of them.[17]

The Zahiri School did not accept the most common forms of analogical reasoning or qiyas as one of the valid secondary sources of Shari’ah. According to the Zahiris, Shi’a Ja’faris, Zaydis and some Mu’tazilis, qiyas is ‘uncertain’, “legislation according to whims” and an “innovation in the religion.” Ibn Hazm articulated this stand by referring to qiyas as, “a judgment without confirmed knowledge following uncertain evidences.”[18] Ibn Hazm also criticized those who supported the legitimacy of qiyas based on ijma’, on the grounds that, in his view such an ‘ijma’ could never be proven.[19]

Accounting for the amount of “uncertainty” inherent in qiyas or legal reasoning (ijtihad) in general allows flexibility in the produced rulings and greater accommodation for possible alternative opinions. As with all other tools of ijtihad, the greater the number of available evidences (adillah) from other ‘sources’ of law, for a particular position, the higher the level of certainty regarding the correctness of the conclusions reached by ijtihad.[20]

[2] In other schools (such as the Ja’fari or Imami of the Shi’ah sect) the principle of “transference of ruling” (ta’diyat al-hukum) is invoked.

[4] There is much greater divergence of opinons on the other “rational tools” or reason-based sources of Shari’ah such as istihsan, sadd al-dhara’i and masalih al-mursalah, as we shall see later on in this material.

[9] A discussion of the different approaches used by jurists and their schools in the application of various forms of analogy is beyond the scope of this work. Interested readers could refer to some of the main references used in this material for further reading. See also, Umar F. Abd-Allah Waymann-Langraf, Malik and Medina: Islamic Legal Reasoning in the Formative Period, Brill, Leiden, The Netherlands, 2013, p.145-157.

[16] This is according to al-Ghazali’s Ash‘arite school, which believes that God ‘does not have to have’ causes/purposes behind His actions. See Jasser Auda, Maqasid al-Shariah as Philosophy of Islamic Law, IIIT, Herndon, 2008, p.216.