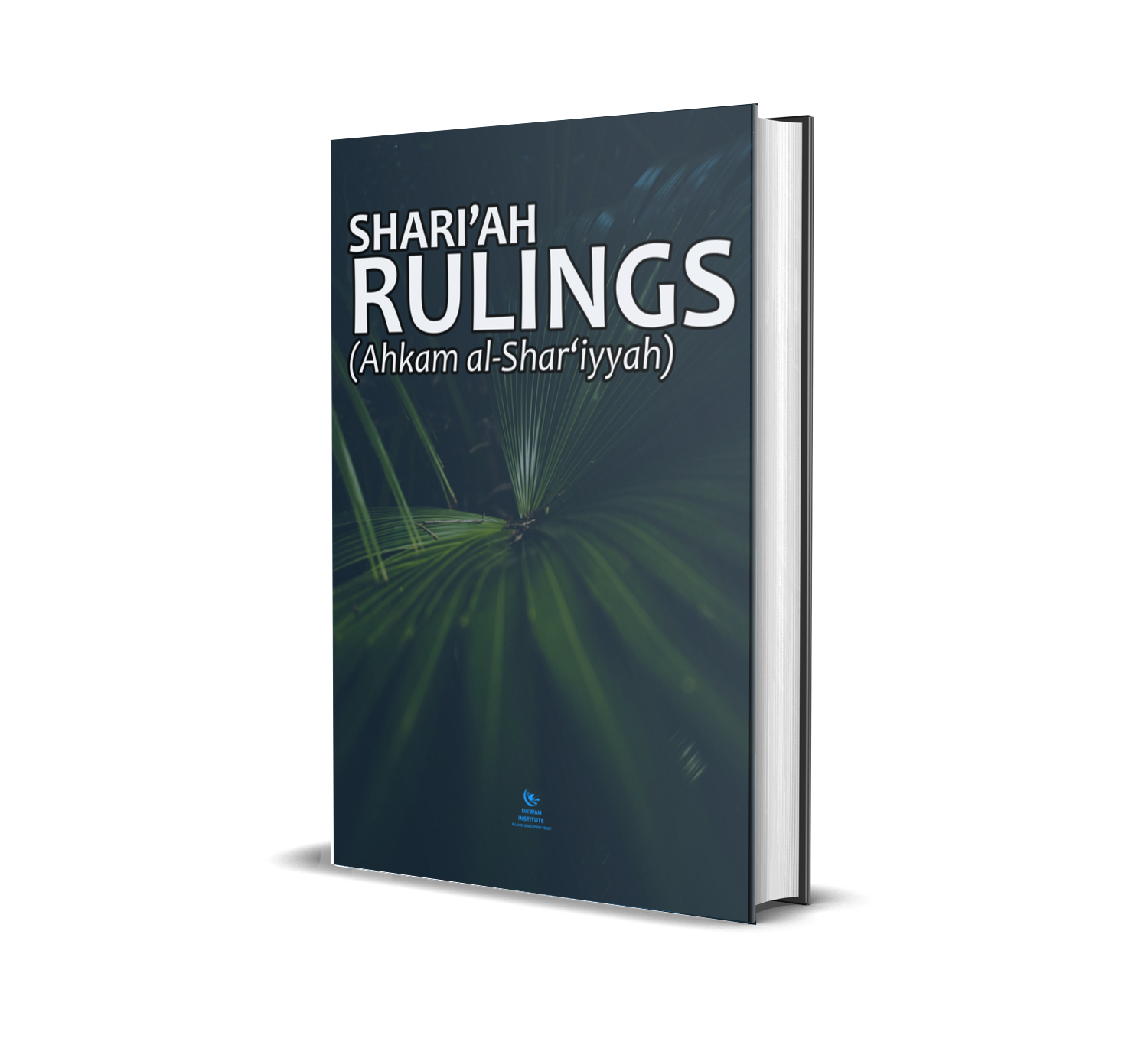 One of the major objectives of Islamic teachings is to guide people towards what is good and right, and to protect them from what is bad, harmful and wrong. Laws and rules are therefore important in helping to identify right from wrong, and in guiding people towards a better and more fulfilling life in accordance with God’s will. Thus, it is important to know how deeds, actions and things are classified, valued and judged, and what the law regards as so important to the objectives of the Islamic way of life as to make compulsory or prohibited, encouraged or discouraged, or merely permissible. These judgments, rulings and verdicts are referred to as the Shari’ah rulings.[1]

Shari’ah rulings however are usually grouped into 2 major categories or types. Those that deal with what is permitted or prohibited for a responsible adult Muslim (mukallif) are referred to as “defining law” (al-hukm al-taklifi), while those that deal with the factors and circumstances that make the permitted and prohibited correct and appropriate for their purposes are referred to as “Declaratory law” (al-hukm al-wad’i).

The first group – the “Defining Law” (al-hukm al-taklifi), mainly defines the extent of man’s choice and liberty of action and consists of a demand or an option. Defining law may therefore be described as a communication from the Lawgiver which demands the responsible adult (mukallaf) to do something or forbids him from doing something, or gives him an option between the two.[2] This type of hukm occurs in the well-known 5 categories of fard/wajib (obligatory), mustahab/mandub (recommended), makruh (discouraged/tolerable), haram (forbidden), and mubah (permissible).[3]

Therefore, issues requiring a religious ruling or verdict (hukum or fatwah) are processed by scholars using the methodology and tools of Usul al-Fiqh. The products of these processes are their “Shari’ah rulings” (Al-Ahkam al-Shar‘iyyah or more precicely, Al-Ahkam al-Shar’iyyah al-Taklifiyyah) which determine the level of accountability, and legal or moral responsibility of a believer on a particular issue. These rulings only apply to Muslims with legal responsibility – i.e. one who is above the age of maturity, free from bondage, and is of sound mental health. These “Shari’ah rulings” (Al-ahkam al-Shar’iyyah al-Taklifiyyah) are the terms used to describe the value and degree of desirability or otherwise of a thing or action.

These Shari’ah rulings or value judgement are broadly classified into the following categories:

Examples include supererogatory (nafilah) prayers and fasting outside Ramadan, tree-planting, charity (sadaqa), forgiveness, greeting others, marriage, cleanliness, and supporting good initiatives, etc. It also comprises ‘instruments’ and acts that facilitate attainment of a fard/wajib, such as being in a state of wudu’outside the times for salat, match-making for marriages, building mosques, and memorizing the Qur’an.

The intention behind an act that is ordinarily mubah or ja’iz and the consequences of such an act may, however, elevate that act to the category of mustahab or relegate it to makruh (see definition below).[7]

Examples of areas considered ja’iz include choice in some technological innovations, games, entertainment and leisure, cultural dishes and cuisine, cultural dressing; choice of health care systems, security systems, educational systems, political systems, architecture, ethnic names and languages, etc. – These are all permissible by default, so long as nothing in them contradicts clear Islamic injunctions or objectives. As mentioned earlier, whatever facilitates or leads to the attainment of goodness or benefit (maslahah) or an objective (maqasid) of Shari’ah will be encouraged (mustahab).

The term halal may be used to refer to the first 4 categories as these are all permitted to varying degrees.

In Islamic legal law, greater attention is paid to the category of fard /wajib and that of Haram, as these entail a sin by omission or commission respectively. As a rule, courts are only concerned about legal breaches that fall under these two categories. However, considerable scope is granted to individual governments to determine what is enforceable in a society’s legislation and what is not. Not everything that is regarded as haram (in worship or social transactions) for example is regarded as a penal or punishable offence by a court. Similarly, not everything that is fard/wajib is automatically also a legal obligation that can or should be handled by the courts. It should be noted that rewards and penalties for most actions in Islam are left with Allah.

Ideally, Muslims should take an interest in rulings for their own personal development and the wisdom and benefit that such prescriptions offer.  With greater spiritual growth, believers focus not just on what is Fard and Haram, but on avoiding the category of makruh and doing more actions in the category of mustahab/mandub.

The five categories listed above are broadly accepted by all madhhabs. In the Hanafi School’s classification, however, there are two additional rulings based on distinctions within two categories.

For example, there is a nuanced distinction between fard and wajib. Fard is established only by conclusive evidence from explicitly clear (qat’i al-dilalah) and undisputedly authentic text (“qat’i al-wurud” or “qat’i al-thubut”) – i.e., from the Qur’an or multiple-chained (mutawatir) hadith. Wajib, however, may be established by indefinite evidence in meaning (zanni al-dilalah) and/or text of probable (zanni) authenticity – i.e., from single-chained (ahad) hadith. This distinction between multiple-chained and single-chained hadith is significant because the latter does not provide absolute certainty of knowledge (ilm al-yaqeen).[9] The combinations of qat’i and zanni as applied to al-thubut/al-wurud and al-dilalah will be discussed in more details in Lesson 34.

As with all the other Schools of Jurisprudence (madhahib) the Hanafis regard the 5 daily prayers as belonging to the category of fard. They however regard the witr prayer (after the night prayer – ‘Isha) as wajib, while others regard it as mustahab or nafilah.[10]

The Hanafi School also distinguishes between 2 types of Makruh: makruh tahrimi and makruh tanzihi. The more serious is makruh tahrimi which is considered a minor sin if committed. This category can be established by single-chained hadith (hadith ahad, also referred to as khabr wahid). Haram in the Hanafi classification is only established by the Qur’an or hadith mutawatir that meets the requirements of certainty. Makruh tanzihi is similar to the “makruh” in the classification of most of the other jurists, and is not sinful if committed.[11]

Below is the common Hanafi classification[12]:

The 5 to 7 Shari’ah rulings, laws and value judgments discussed earlier however do not exist in a vacuum. In order to be appropriate, correct, and fulfill their purposes, each defining law (al-hukm al-taklifi) would have certain factors – reasons/causes, conditions and hindrances – declared by the Lawgiver that are attached to them. This category of factors is referred to as “Declaratory law” (Al-hukm al-wad’i).

When the sources of Shari’ah say for example that the morning Fajr prayer is compulsory, it does not mean that it is compulsory for an immature child, or that it is compulsory before its time is due, or that it is compulsory for a menstruating woman, etc. The statement that the Fajr prayer is compulsory is correct. However, it is with the understanding or assumption that certain complementary conditions or factors are also considered, or cetaris paribus – “all other things being equal” or “other conditions remaining constant (or the same)”. These other factors, clauses and considerations which are the subject matter of the “Declaratory laws” (al-ahkam al-wad’iyyah) are themselves declared by the same sources of Shari’ah as the “Defining laws” (al-ahkam al-taklifiyyah). Thus, both declaratory and defining laws come from the Shari’ah.

The “Declaratory laws” (Al-Ahkam al-wad’iyyah) are defined as communication from the Lawgiver which enact or declare something into a cause (sabab), a condition (shart) or a hindrance (mani`) to something else. The function of declaratory law is explanatory in relation to defining law, in that the declaratory law explains the component elements of the latter.[13] The “declaratory laws” therefore serve as the “special clauses” that go with the “defining laws” of Shari’ah on any particular issue.

A shari’ah ruling (hukum) would therefore be regarded as correct, sound and applicable on the understanding that the ‘reason’ or ‘cause’ (sabab/‘illah) for the application of the ruling exists – e.g., the afternoon (zuhur) prayer is compulsory if its time is due; that any condition (shart) for the validity of the act has been met, as defined by the text[14] – e.g. ablution (wudu’) is a condition for the validity of salat; that there are no ‘hinderances’ (mani’) that renders the legal effect of the reason/cause to be valid – e.g. having insufficient savings (below the nisab) is a hinderance for the legal effect of the obligation to pay zakat.

Therefore, the ‘correctness’ (al-sihhah) of a Shari’ah ruling (hukum al-shari’y al-taklifi) is reached if the reasons exist, conditions are met, and hindrances are avoided. Otherwise, the transaction or action is void and incorrect (fasid or batil).[15] This is very important to the understanding of when general rulings of Shari’ah apply and when exceptions to those rules are called for by the Shari’ah itself. This is also important in appreciating when strict or normal laws (‘azimah) are to be followed, and when Shari’ah demands that these be replaced by concessionary laws (rukhsah).[16]

These textually stated factors and circumstances (Al-Ahkam al-wad’iyyah) that are taken into consideration (or taken for granted!) when assigning the ahkam al-shari’yyah al-taklifiyyah (rulings) – of fard, haram, makruh, etc. – to any issue or thing do affect the correctness or otherwise of any ruling, hukum or fatwa.[17]

The Qur’an and Sunnah therefore not only issue value judgements or rulings regarding permissibility or prohibition of particular actions, they also declare the complementary contextual factors – causes/reasons, conditions and hindrances – that make these rulings correct and appropriate for the Lawgivers’s objectives. If any of these factors, conditions and causes change or cease to exist, then, the original ruling ceases to exist.

This is also why it is very crucial that all issues related to important judgements, rulings and fatwas are handled by competent judges or jurists who are well versed in the knowledge of both the defining and the declaratory laws.

Shari’ah rulings are therefore always sensitive to a number of factors if they are to achieve their desired benefits and goals (maslahah or maqasid). The understanding of these factors in each context is critical to the correctness, appropriateness, quality and relevance of the verdicts and rulings given by a scholar. As contexts and the factors – causes, conditions and hinderences – change, so also should the rulings change, and they do so with the same authority as the original rulings themselves, as both the defining law and the declaratory laws that go with them are prescribed by the Lawgiver or Primary sources of Shari’ah.

Consequently, a legal maxim which distinguished jurists have always respected states that “It may not be denied that laws will change with the change of circumstances” (la yunkar taghayyur al-ahkam bi taghayyar al-zaman wa al-ahwal).[18]

[1] For a more thorough discussion of this topic and differences between scholars on the definitions of certain terms, see Mohammad Hashim Kamali, Principles of Islamic Jurisprudence, The Islamic Text Society, Cambridge, 2001, p. 279-296

[11] Ahmad Hasan, The Principles of Islamic Jurisprudence: The Command of the Sharia and Juridical Norm, Adam Publishers, New Delhi, 2005, p.133

[16] Whereas `azimah is the law in its normal state, rukhsah embodies the exceptions, if any, that the Lawgiver has granted with a view to bringing facility and ease in difficult circumstances. Thus the law which grants a concession to travelers to break the fast during Ramadan is an exception to the norm that requires everyone to fast. The concessionary law in this case is valid only for the duration of traveling, after which the ‘azimah must be complied with again. (See Mohammad Hashim Kamali, Principles of Islamic Jurisprudence, The Islamic Text Society, Cambridge, 2001, p.293-294)