SHOULD A MUSLIM CALL A NON-MUSLIM FRIEND KAFIR! 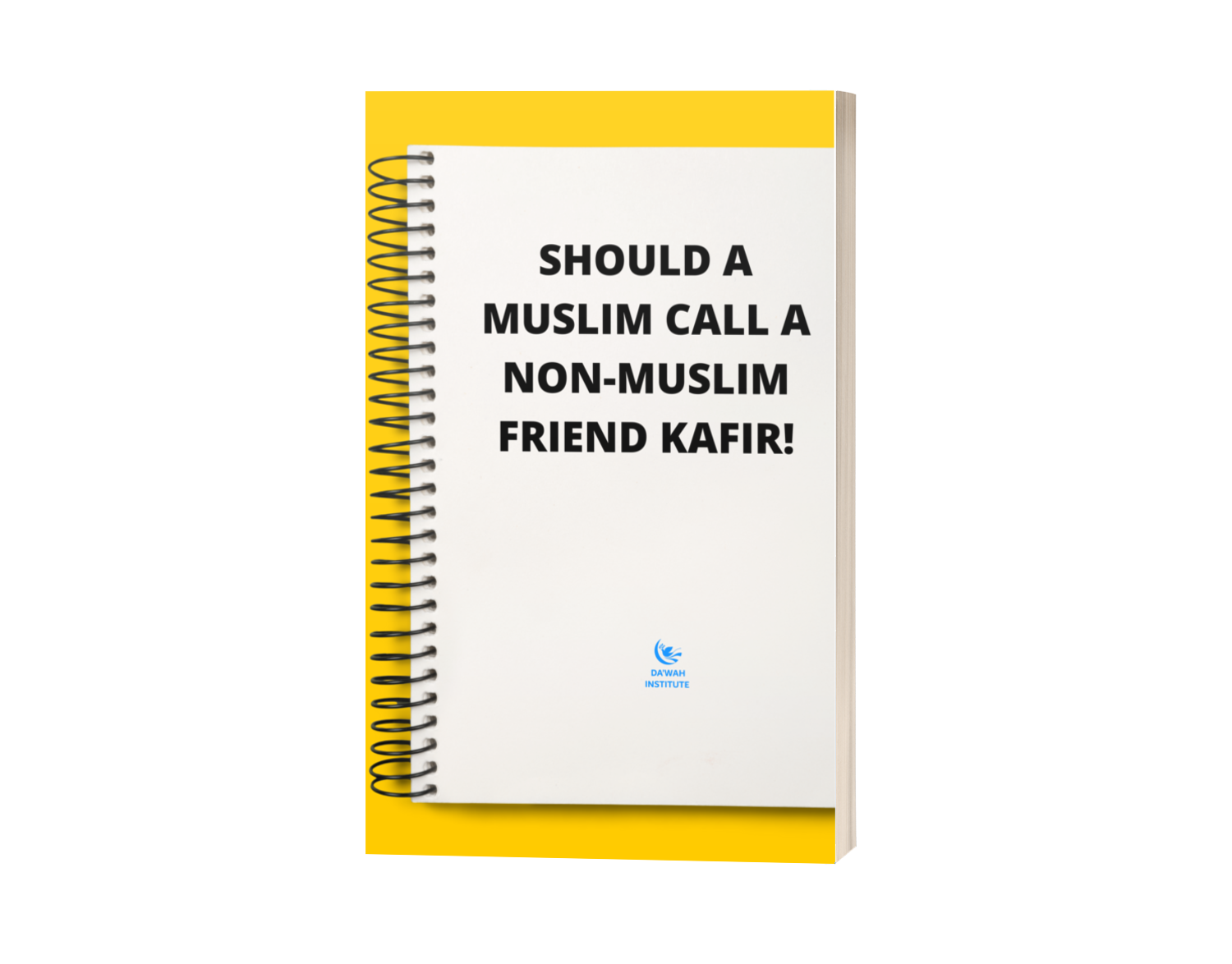 Some Muslims call Christians and other non-Muslims by names such as Kafir (in Arabic), Arne (in Hausa), Kirdi (in Kanuri), etc., which these people regard as insulting. Since Islam is interested in peaceful coexistence, should Muslims call people of other faiths by these terms and names which they hate and find derogatory?

There are several words used in the Qur’an and Hadith to describe actions and beliefs that Allah regards as wrong, misguided, blameworthy and unbecoming of anyone. These terms and those actions and attitudes associated with them, help guide us in knowing what to avoid in life and why. These terms are taught to us as descriptive of certain behaviours we should avoid, and not as names we should use when addressing people who may, in reality, be misguided wrongdoers. These words and phrases include munafiq (hypocrite), fasiq (wrong-doer), mushrik (polytheist), dhalim (unjust), jahiliy (ignoramus), najas (impure, dirty or immoral), kafir (ingrate, disbeliever), As-hab al-Nar (“People of the Fire”), etc.

In a particular context or usage, a word or term (such as kafir) may take on a purely descriptive meaning, referring to anyone who rejects or does not accept Islam. In this sense, every non-Muslim is a Kafir. In another sense, however, the same word may be viewed or perceived as derogatory, insulting, or condemnatory and also as being regarded or categorized together with Atheists or Polytheists.

While it may be true that a person (whether Muslim or non-Muslim) is actually guilty of fisq, nifaq, shirk, kufr, etc., it is not proper to call people by names such as Fasiq, Munafiq, Mushrik, Kafir, etc., respectively, especially if these names are offensive or insulting to them. Similarly, just because it is true that a person is actually an illegitimate child, does not make it proper to address such a person as a bastard or any other similarly offensive name.

Allah makes it categorically clear in the Qur’an that the Pharaoh – of the time of Prophet Musa (p) – was a dhalim and kafir,[1] and that prophet Musa (p) was one of the greatest and most respected messengers of Allah (among the Uwl al-‘Azm[2]). Yet, Musa (p) was instructed when addressing Pharaoh to speak nicely, politely and softly to him, with the optimism that he may listen and take guidance, in spite of all his atrocities, arrogance and disbelief.

Allah says, “And speak to him (Pharaoh) with gentle speech that perhaps he may be reminded or fear [Allah].” (Qur’an 20:44)

Therefore, even if a person is as confirmed in his kufr by Allah Himself as Pharaoh was, he still deserves courtesy from a person of faith. How then can anyone who does not have the standing of Prophet Musa (p), justify their qualification to speak rudely or insultingly at anyone who is not even as bad as Pharaoh in their Kufr?

Allah says in the Qur’an, “Invite to the way of your Lord with wisdom and beautiful exhortation. (Qur’an 16:125)

Someone once said to the Prophet (p), “Pray to Allah against the polytheists and curse them!” The Prophet (p) replied, “I have not been sent as the invoker of curses; I have only been sent as a mercy.”[3] He also said, “Do you know what is better than charity and fasting and prayer? It is keeping peace and good relations between people, as quarrels and bad feelings destroy mankind”.[4] The Prophet (p) similarly said, “A believer should not taunt, curse, abuse or talk indecently”.[5]

While the term kufr may be used to describe any wrong or unacceptable belief or ideology – such as the Trinity (Q5:17) or Sonship of Jesus (Q5:73) etc. – the Qur’an and Sunnah do not use the term ‘kafir’ to refer to, call or address Christians or Jews (Ahl al-Kitab) or even Zoroastrians. These religious communities were addressed by the Qur’an and the Prophet (p) by the names they called themselves – “Jews” (Yahud), “Christians” (Nasara), “Zoroastrian” (Majus), etc. More frequently, however, they were referred to and addressed in the Qur’an and Hadith by the honourable term “Ahl al-Kitab” (People of the Book) in recognition of their association with earlier divine revealed scriptures (or Books) and genuine prophets of Allah such as Musa and Isa (peace be upon them).

In more than 12 places, the Qur’an instructs the Prophet (p) and Muslims when addressing Jews and/or Christians, by the words: “Say! O People of the Book (Ahl al-Kitab)…”. Allah Himself addresses them with the phrase “O People of the Book!…”. In many other verses, they are referred to as “Those who have been given Scriptures (before you)…“. These are beside the numerous instances where they are referred to as Yahud (Jews) or Nasara (Christians). In fact in the Qur’an, Allah describes the term “Nasara” (Christians) as a term that they use to describe themselves – “Those who call themselves Christians” (Qur’an 5:82) and “And from among those who said, ‘we are Nasara’ (Christians)…” (Qur’an 5:14).

Another concern is the fact that in many modern contexts and cultures, the terms kafir (in Arabic), kirdi (in Kanuri), or Arne (in Hausa), etc. are viewed as derogatory and insulting terms for addressing others, including non-Muslims. Unfortunately, some Muslims also deliberately use these terms with the intent to insult. Within such a context, it would be wrong and improper for a Muslim to use such terms to offend or insult others, especially when there are alternative, completely valid and even more appropriate names for describing the religious identities of non-Muslims.

The Prophet (p) said, “Actions are judged by their intentions”.[6] Based on this and other similar statements in the Qur’an and hadith, Muslim jurists have derived a legal maxim (Qa’idah al-Fiqhiyyah) which states that “Matters will be judged by the purposes they fulfil” (Al-umuru bi-maqasidiha). They also conclude that “liability is decided on the basis of intention and meaning and not on the basis of words and forms” or that “greater consideration is paid to the intent and not to the words”.[7] Thus, what is meant by a statement or term matters more than the words used. If a word like kafir (or any other) is therefore used in a particular context with the intent to insult, abuse or denigrate another person, then it is wrong Islamically.

Besides the immorality of insults and abuse, there is also the concern for consequences and for reciprocation with insults and inappropriate language in response. The Qur’an and Hadith have in fact consistently prohibited Muslims from hurting or insulting others through harsh words and derogatory nicknames that would make others insult Muslims in return.

Allah instructs in the Qur’an, “Do not call each other by offensive nicknames” (Qur’an 49:11). Even though idols represent some of the greatest forms of sin against Allah – shirk (polytheism) – the Qur’an categorically prohibits Muslims from insulting those other than Allah who polytheists worship, as they may also respond with insults against Allah.  Allah instructs, “And do not insult those they invoke other than Allah, lest they insult Allah in enmity without knowledge…” (Qur’an 6:108)

Regarding the concern for reciprocation, the Prophet (p) gave an example of how a person would indirectly be abusing his or her own parents. He said, “Among the major sins, is for a person to abuse his parents”. A companion said, ‘How would a man abuse (his parents)? The Prophet (p) said, “(It would be) by him abusing someone, who will then (in return) abuse his parents.”[8]

Abu Hurayra reported that the Messenger of God (p) said, “The Muslim is he from whose tongue and hand all people are safe…”[10]

Imam Ahmad bin Hanbal narrated in his Musnad from ‘Abd Allah bin ‘Amr bin al-‘As who reported that a man said, ‘O Messenger of God (p)! What [person’s] Islam is best?’ The Prophet (p) replied, “The one from whose tongue and hand all people are safe.”[11]

Imam al-Tabarani has also narrated from ‘Abd Allāh bin ‘Amr who said that “A man asked the Prophet (p), ‘O Messenger of God! Whose Islam is best?’ The Prophet (p) replied, ‘The one from whose tongue and hand all people are safe’.”[12]

Abdullah bin Umar narrated that a man asked the Prophet Muhammad (p), “What kind (or part) of Islam is best?”  The Prophet (p) replied, “That you serve food and give the salutations of peace to the one whom you know, and the one whom you don’t know.”[13]

« SHOULD CHRISTIAN OF TODAY BE REGARDED AS AHL AL-KITAB (PEOPLE OF EARLIER REVELATION)
  IDEALS IN INTERFAITH RELATIONS: HOSTILITY OR HARMONY? »