SHOULD A MUSLIM TRUST PEOPLE OF Other Faiths? 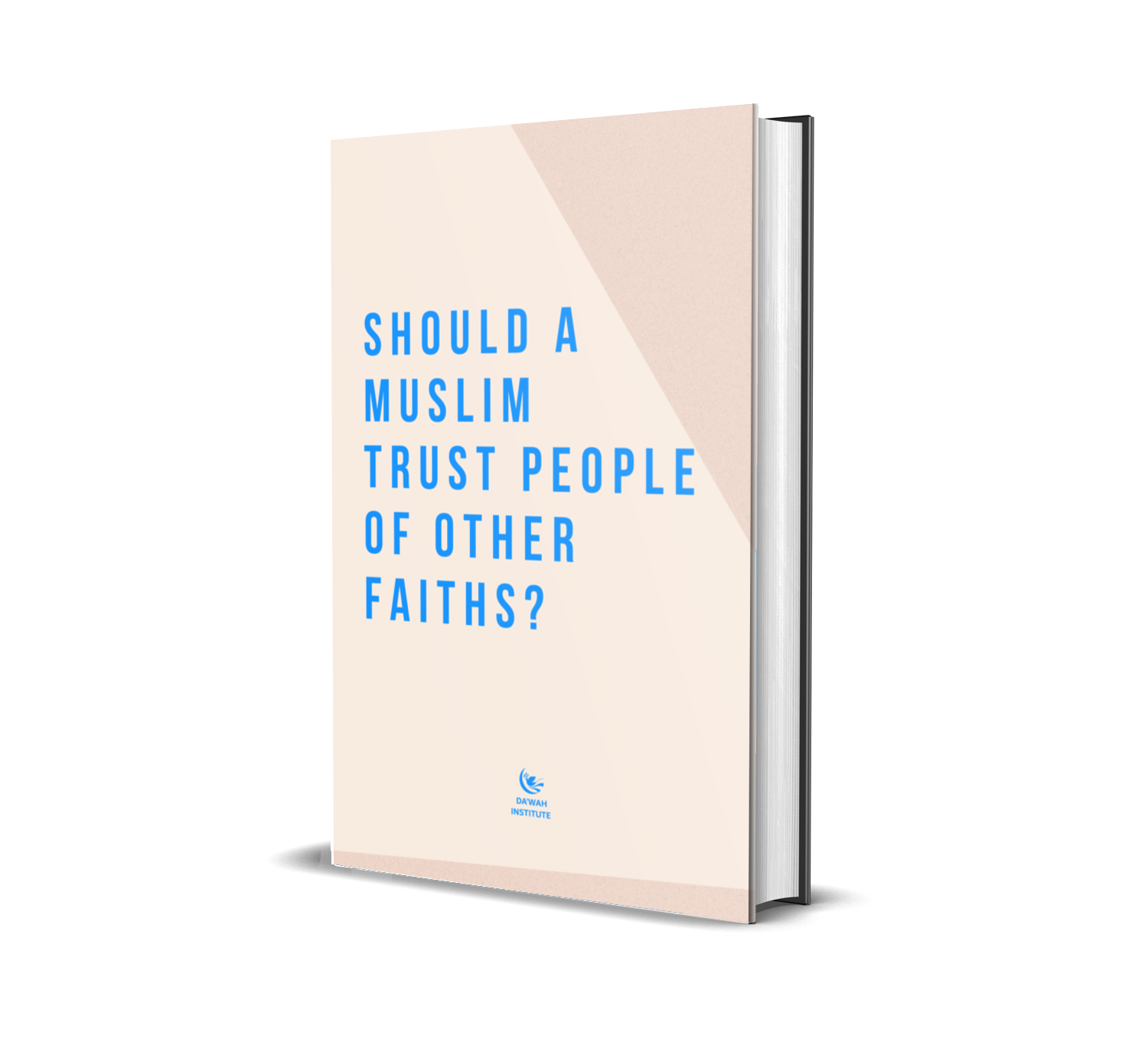 Some Muslims believe that Islam teaches that Muslims should not trust non-Muslims simply on account of the difference in faith. As a result, they avoid and discourage others from having business and other dealings with people of other faiths. This undermines communal relations and healthy interdependence, and gives the impression that a Muslim society is arrogant and unwelcoming to people of other faiths.

Does Islam recognize honesty, integrity and sincerity in people of other faiths? Can a Muslim trust non-Muslims?

The Qur’an and Sunnah make it clear that not all non-Muslims are corrupt, immoral or bad people, just as not all Muslims are virtuous, decent or good people. There are honest and trustworthy people, along with hypocrites (munafiqun), and wrongdoers (fasiqun), etc. among all religious and irreligious communities.  A few verses will suffice to demonstrate this point:

“(But) they are not all alike: among the followers of earlier revelation, there are upright people…” (Qur’an 3:113)

“And there are people who say, ‘We do believe in God and the Last Day,’ while they do not (really) believe. They would deceive God and those who have attained to faith – they deceive none but themselves, and perceive it not.”     (Qur’an 2:8-9)

In other words, a person is not judged as corrupt and untrustworthy simply because he is a non-Muslim, nor is he automatically good, honest and trustworthy just because he is a Muslim. A person may also be trustworthy in one thing or one aspect of life, but not in another. There should be reasonable trust and good expectations of everyone, as Allah reminds us, “If you judge between mankind, judge with justice”(Qur’an 4:58) and “Do not let hatred of any people cause you to swerve from justice. Be just: this is nearest to being God-conscious.” (Qur’an 5:8)

Trusting and seeking help from non-Muslims was done at the time of the Prophet (p) and is thus not just permissible but is a part of his tradition (sunnah). This is of course provided that such relationship, like every other relationships, do not endanger or compromise Islamic values and principles. For example, the Prophet (p) employed Abdullah bin Uraiqit, a polytheist, to be his guide on his “Hijra” (i.e. “flight; migration”) from Mecca to Medina. Aisha narrated that:

“The Prophet (p) and Abubakr employed a man from the Bani Al-Dil and the tribe of Bani ‘Abd bin ‘Adi as a guide. He was an expert guide and he broke the oath of contract which he had to abide by with the tribe of Al-‘Asi bin Wail, and he was on the religion of Quraysh polytheists. The Prophet (p) and Abubakr had confidence in him and gave him their riding camels and told him to bring them to the Cave of Thaur after three days. So, he brought them their two riding camels after three days and both of them (the Prophet (p) and Abubakr) set out accompanied by ‘Amir bin Fuhaira and the Dili guide who guided them below Mecca along the road leading to the sea-shore.”[1]

A person’s state of unbelief, therefore, does not necessarily mean that he is untrustworthy. The Prophet’s life was at stake, yet this particular polytheist was trustworthy, and the Prophet (p) trusted him. Other trusted non-Muslims included Abu Talib, the Prophet’s beloved uncle, who gave the Prophet (p) protection and security in Mecca, and Mut’im bin ‘Adi,whowas one of the leaders of Mecca that sympathized and helped the Prophet (p) and other Muslims especially during the years of the Boycott by the Meccans.[2]

It is also a well-known historical fact that the Prophet (p) trusted the ChristianEthiopian King (the Negus), Ashamah bin Abjar al-Najashi, with the lives of the first group of Muslim refugees escaping persecution from the polytheists of Mecca.[3]

Similarly, it was reported that Mukhayriq, a Jewish rabbi from the Jewish clan of Tha’labah fought alongside the Prophet (p) and the companions in the Battle of Uhud, where he died.[4]

“In his book, Al-Adab ash-Shari’ah, Ibn Muflih writes that Sheikh Taqiuddin Ibn Taymiyyah said: ‘A credible Jew or Christian who has medical expertise may treat a sick Muslim. Such a person may, likewise, be entrusted with funds or other financial transactions, for Allah, the Exalted, says: “Among the People of the Book are some who, if entrusted with a hoard of gold, will (readily) pay it back; others, who, if entrusted with a single silver coin, will not repay it unless you constantly stand over them demanding it.” (Qur’an 3:75)  We find in a sound hadith that the Prophet, peace be upon him, hired a polytheist as a guide at the time of his migration to Medina, so he entrusted him with his life and money. The people of the tribe of Khuza‘ah, who were both Muslims and polytheists, acted as scouts for the Messenger of Allah (p). It is also reported that the Prophet (p), ordered Muslims to seek treatment from Al-Harith ibn Kildah, who was a disbeliever…. The same applies when one has to entrust a person with funds or deal with him in business. If a Muslim has to confide in or turn to someone from the People of the Book for medical treatment, he may do so. It is not prohibited to befriend Jews and Christians. And when the Muslim has an opportunity to talk to them, he should address them in ways that are polite and sincere. Indeed, Allah, the Exalted, says: “And do not argue with the people of the Book, except in ways that are best.” (Qur’an 29:46) In a hadith on the Treaty of Hudaibiyyah, Abu Al-Khattab tells us that, ‘the Prophet (p) sent a man of the Khuza‘ah tribe to gather intelligence, and the Prophet (p) accepted his report despite the fact that he was a disbeliever.’ This proves, according to Abu Al-Khattab, that it is quite permissible to take the advice of a non-believing physician for diagnosis and treatment, provided he is not suspected and his fidelity is not doubtful.”[5]

Even as late in the sequence of revelation as the Farewell Hajj, the Prophet (p) asked Al-Harith bin Kaladah, a non-Muslim physician, to treat the illness of his close companion Sa’d bin Abi Waqqas.[6]

These examples show that the Prophet (p) and the early Muslims (salaf) worked and cooperated with people of other faiths in various capacities. They also trusted and consulted with them and assigned to them positions of responsibility at the private and governmental level and in fields such as medicine, administration and political treaties, transport, agriculture, trade and industry, security and military, etc. In such areas, however, it is also encouraged that Muslims should collectively strive to avoid complete reliance on others and gain independent strength vis-à-vis their status in comparison to non-Muslims, as this is in the interest of greater social equity, self-determination and effective political and economic interdependence.

« CAN A MUSLIM LOVE & BE FRIEND WITH NON-MUSLIM?
SHOULD A MUSLIM SHOW HOSPITALITY AND VISIT NON-MUSLIM? »