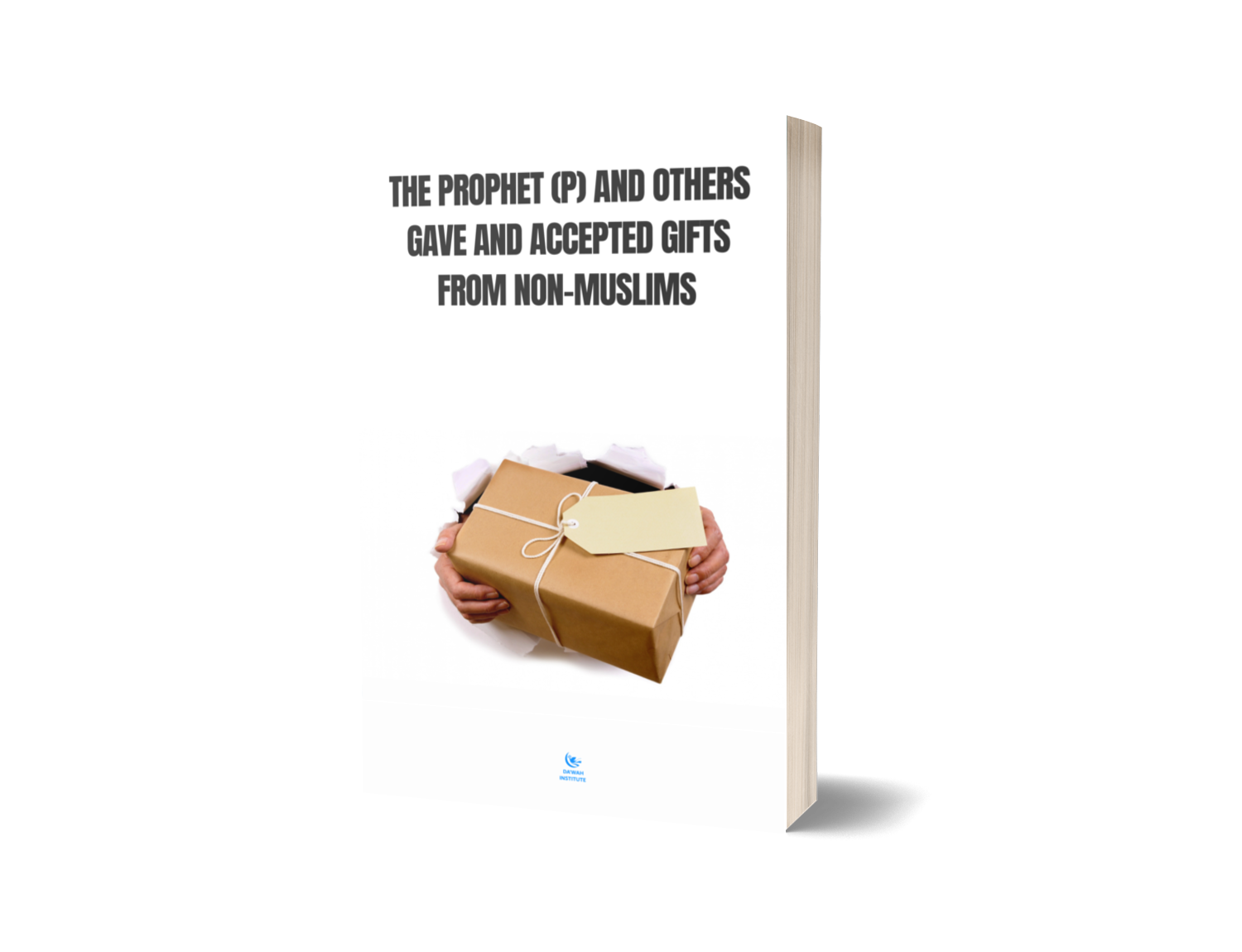 During the period of the peace treaty of Hudaibiyah, the Prophet Muhammad (p) gave Abu Sufyan (the leader of the polytheists of Mecca then) the very generous sum of 500 dinars (of gold)[1] to assist the poor of Mecca during their brief period of severe food shortage.[2]

This financial aid to the Meccans was made despite their belief in idols, their past persecution and murder of Muslims, warfare and other inhuman atrocities and crimes against the Muslims of Mecca and Medina. These same Meccans were even responsible for the murder of a number of close companions and even relatives of the Prophet (p) himself.

Aishah, the wife of the Prophet (p) narrated that a Jewish woman came to her begging, so she gave her something. The Jewish woman then said to Aishah, “May Allah protect you from the punishment of the grave…”[3]

It was reported by Abdullah bin Umar that, “Umar bin Al-Khattab saw a silken dress (cloak) being sold at the gate of the Mosque and said, “O Allah’s Messenger (p)! Would that you buy it and wear it on Fridays and when delegations come to you!” Allah’s Messenger (p) said, “This is worn by the one who will have no share in the Hereafter.”[4] Later on, some silk dresses were brought (as a gift) to the Prophet (p), and he sent one of them to Umar. Umar said (to the Prophet (p)), “How do you give me this to wear while you said what you said about the (silken) dress of ‘Utarid?” Allah’s Messenger (p) said, “I have not given it to you to wear.”[5] So, Umar gave it to a polytheist brother of his in Mecca.”[6]

Imam al-Nawawi, while commenting on the hadith, said that it is permissible for a Muslim to give cloth and other things to a polytheist.[7]

Abu Humaid al-Sa’idi narrated that, “The King of Ailah sent a white mule and a sheet (of cloth) for wearing to the Prophet (p) as a present …”[8]

The Prophet (p) accepted gifts from Muqawqas, the Coptic Chrsitian King of Egypt, who sent among other things, a rich present of a thousand measures of gold, twenty robes of fine cloth, and a mule.[9]

It was reported that Umar bin al-Khattab saw an old Jewish man begging from people. Umar inquired and was informed that the man was forced into begging due to his old age and needy situation. Umar then sent him to the treasurer of the Muslims’ treasury and instructed him to give the elderly man and those who are in the same situation with him what will suffice them from the treasury. Then he (Umar) asserted: “We are not fair to him to abandon him while he is old after we had collected Jizyah from him while he was young.”[10]

“If you disclose your Sadaqat (alms-giving), it is well; but if you conceal them and give them to the poor, that is better for you. (Allah) will expiate you some of your sins. And Allah is Well-Acquainted with what you do. Not upon you (Muhammad (p)) is their guidance, but Allah guides whom He wills. And whatever you spend in good, it is for yourselves, when you spend not except seeking Allah’s Countenance. And whatever you spend in good, it will be repaid to you in full, and you shall not be wronged.” (Qur’an 2:271 – 272)

“There is no compulsion in religion. Verily, the Right Path has become distinct from the wrong path. Whoever disbelieves in Taghut and believes in Allah, then he has grasped the most trustworthy handhold that will never break. And Allah is All-Hearer, All-Knower.” (Qur’an 2:256)

“Indeed in the Messenger of Allah (Muhammad (p)) you have a good example to follow for him who hopes for (the Meeting with) Allah and the Last Day, and remembers Allah much.” (Qur’an 33:21)

Also, the Prophet (p) warned that, “None of you should look down upon the gift sent by her neighbour, even if it were the feet of a sheep.”[11]

He (p) similarly said, “If someone is given something, he should give something in return for it, provided he can afford that. If he cannot afford that, he should praise him (the giver). He who praises him for it thanks him, and he who conceals it, is ungrateful to him.”[12]

When the Prophet (p) first migrated to Medina, and was concerned about the meagre resources available to assist those in poverty, he instructed his Companions to give charity only to those who accepted Islam.[13] In correction of this prophetic instruction, Allah revealed the verse:

“It is not for thee (O Prophet) to make people follow the right path, since it is God alone who guides whom He wills; and whatever good you may spend on others is for your own good, provided you spend only out of a longing for God’s guidance. For whatever good you may spend will be repaid unto you in full and you will not be wronged.” (Qur’an 2:272)

According to several traditions reported by al-Nasa’i, Abu Dawood and others, the Prophet (p) then explicitly enjoined Muslims to give charity to all who needed it, irrespective of faith.[14] Muhammad Asad notes that, “There is full agreement among all commentators that the above verse… lays down an injunction binding upon all Muslims.”[15] In fact, Imam al-Razi derives from this verse the conclusion that withholding charity must never become a means of attracting unbelievers to Islam, for faith, in order to be valid, must be based on conviction and free choice.[16]

Ibn Kathir states on the issue of one’s charity possibly being used for un-Islamic purposes (if one gives to a non-Muslim):

‘Ata Al-Khurasani said that the āyah [“verse”] means, “You give away charity for the sake of Allah. Therefore, you will not be asked about the deeds [or wickedness] of those who receive it.” (Ibn Abi Hatim, 3:115). This is a sound meaning… [The giver] will not be asked if the charity unintentionally reached righteous, evil, deserving or undeserving persons, for he will be rewarded for his good intention. The proof to this statement is the āyah, “And whatever you spend in good, it will be repaid to you in full, and you shall not be wronged.”[17]

One can give sadaqa to the dhimmi[18] and the non-dhimmi, and one is rewarded for that. Allah praised a group of people (for this) when He said, “And they feed, for His love, the indigent, the orphan, and the captive” [Q. 76:8]. The captive is a non-dhimmi …[19]

Imam al-Shafi’i said: “There is nothing wrong with giving charity to a mushrik (polytheist) as a nafilah (recommended) action…. Allah praised people who, as He says: ‘… they give food, in spite of their love for it (or for the love of Him), to the miskin (the poor), the orphan and the captive’[20]. (Quran 76:8)

It is clear from the narratives above that Islam is not against being sympathetic and kind to people of other faiths. Thus, Muslims are permitted to assist non-Muslims in times of hardship; and maintain good relationship with them. Likewise, Muslims are forbidden to use economic pressure to force non-Muslims to accept Islam.

Also, Muslims are recommended to receive and accept gifts from non-Muslims, and even thank them for it. Similarly, Umar’s compassion towards the old beggar Jew shows the fairness and magnanimity with which the early Muslim leaders dealt with the non-Muslims under them.

These cases therefore counter the argument of those who believe that Muslims are expected to be in a permanent state of hostility with non-Muslims. They also prove that Muslims should be charitable and show kindness to people who are in need, irrespective of their faith. They thus show the permissibility of exchanging gifts between Muslims and non-Muslims, which is a means of promoting harmonious living with fellow human beings.

[4] Elsewhere, the Prophet (p) had taught that wearing silk and gold is forbidden for Muslim men. However, it is permissible for silk to be used by Muslim women as well as non-Muslims.

[5] The question of what type of gift can or cannot be given to non-Muslims is outside the scope of this discussion.

[18] A non-Muslim subject of an Islamic state, protected by a covenant.