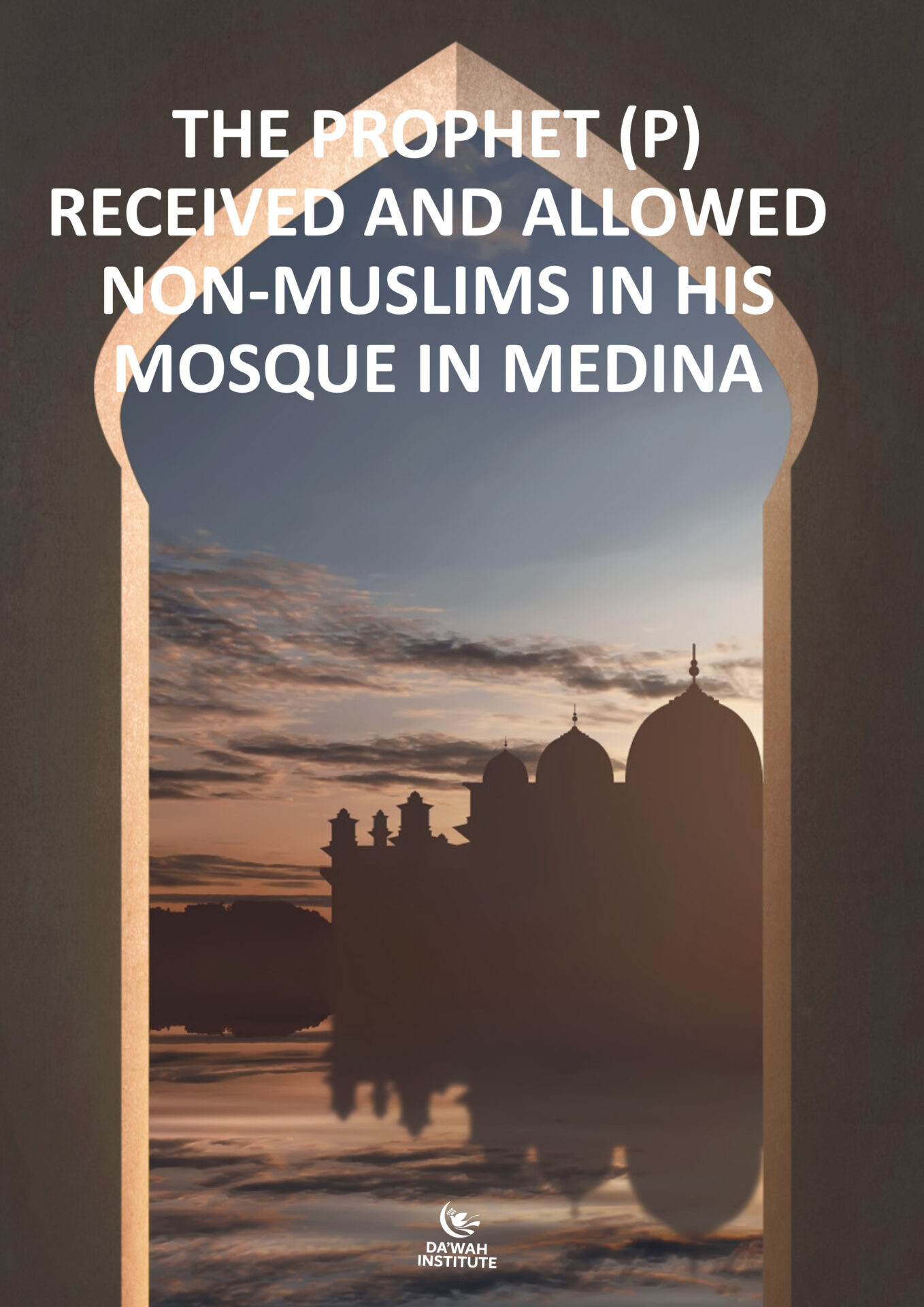 Prophet Muhammad (p) hosted a delegation of 60 Christians from Najran in his Mosque in Medina; they spent three days there.[1] This was during the last (9/10th) year after the Prophet’s (p) migration to Medina.

Ibn Ishaq said, “Muhammad bin Ja’far bin Al-Zubair said that, “The (Najran) delegation came to the Messenger of Allah (p) in Medina, and entered his Masjid (mosque) wearing robes and garments, after the Prophet (p) had prayed the Asr prayer. They accompanied a caravan of camels led by Bani Al-Harith bin Ka’b. The Companions of the Messenger of Allah (p) who saw them said that they never saw a delegation like them after that. When their worship time came, they stood up to perform their worship in the Prophet’s (p) Mosque. The Messenger of Allah said: “Let them (worship)” and they prayed towards the East.”[2]

The Prophet Muhammad (p) allowed polytheists from the Arab tribe of Banu Thaqif from Ta’if, and many other non-Muslim communities, into his Mosque (Masjid al-Nabawiy) in Medina during the 9th year of Hijrah for peace talks and treaty agreements.[3] The Prophet did not view their polytheistic beliefs as a barrier to their entering his Mosque for interfaith dialogue and peace-building purposes! It is clear that he did not hold the view espoused by some Muslims that people of other faiths are “not pure enough” to enter any mosque.

According to Ibn Ishaq, “…About twenty Christian men from Abyssinia came to see the Messenger of Allah (p) while he was in Mecca. News of him had reached them in Abyssinia, and so they came to Mecca and found him in the Mosque. They sat with him and spoke to him, and asked him questions while men from the Quraish were in their meeting places around the Ka’bah…”[4]

He was brought to Medina and tied to one of the pillars of the Prophet’s (p) Mosque. The Prophet (p) went to see him and said, “What have you got, O Thumama?” He replied, “I have got a good thought, O Muhammad! If you should kill me, you would kill a person who has already killed somebody (among you), and if you should set me free, you would do a favour to one who is grateful; and if you want property, then ask me whatever wealth you want.” He was left till the next day when the Prophet (p) said to him, “What have you got, Thumama?” He said, “What I told you, i.e. if you set me free, you would do a favor to one who is grateful.” The Prophet (p) left him till the day after, when he said again, “What have you got, O Thumama?” He said, “I have got what I told you.” On that the Prophet (p) said, “Release Thumama.” So he (i.e. Thumama) went to a garden of date-palm trees near the Mosque, took a bath, then returned to the Mosque and said, “I testify that none has the right to be worshipped except Allah, and also testify that Muhammad is His Apostle! By Allah, O Muhammad! There was no face on the surface of the earth most disliked by me than yours, but now your face has become the most beloved face to me. By Allah, there was no religion most disliked by me than yours, but now it is the most beloved religion to me. By Allah, there was no town most disliked by me than your town, but now it is the most beloved town to me. Your cavalry arrested me (at the time) when I was intending to perform the `Umra. And now what do you think?” The Prophet (p) gave him good tidings (congratulated him) and ordered him to perform the `Umra. So when he came to Mecca, someone said to him, “You have become a Sabian?” Thumama replied, “No! By Allah, I have embraced Islam with Muhammad, the Apostle of Allah. No, by Allah! Not a single grain of wheat will come to you from Yamamah (in the Najd area) unless the Prophet (p) gives his permission.”[6]

“There has come to you enlightenment from your Lord. So whoever will see, does so for [the benefit of] his soul, and whoever is blind [does harm] against it. And [say], “I am not a guardian over you.” (Qur’an 6:104)

“The good deed and the evil deed cannot be equal. Repel (the evil) with one which is better (i.e. Allah orders the faithful believers to be patient at the time of anger, and to excuse those who treat them badly) then verily he, between whom and you there was enmity, (will become) as though he was a close friend.” (Qur’an 41:34)

“…Unto every one of you have We appointed a (different) law (Shari’ah) and way of life (Minhaj). And if God had so willed, He could surely have made you all one single community, but (He willed it otherwise) in order to test you by means of what he has revealed unto you. Compete, then, with one another in doing good works! Unto God you all must return, and then he will make you truly understand all that on which you were wont to differ…” (Qur’an 5:48-49)

Ibn Rajab al-Hanbali said, “It is understood from this hadith that Thumamah was a polytheist when he was tied in the Mosque, but embraced Islam after he had been set free. So, there is a proof in this hadith that a polytheist can be allowed into the mosque if permitted by Muslims. The Prophet (p) had once allowed non-Muslim delegates of Thaqif into the Mosque in order to ease or soften their hearts. Waqi’ reported from Sufyan (who reported) from Hassan who said that a delegation came to the Prophet (p) from Thaqif, and they entered the Mosque to meet him… This is similar to other Arab non-Muslim delegations and the Christian deputation from Najran, all of whom were allowed into the Mosque of the Prophet (p) and they sat therein with the Prophet (p). Also, when the polytheists of Quraish came to ransom the captives of the Battle of Badr, they slept in the Mosque.”[8]

Ibn Qayyim al-Jawziyyah said, “In this (incident of the Christians of Najran) is a (precedence of) permission for them to enter the mosques of Muslims; it makes it possible for them to offer their prayers in the presence of Muslims and in their mosques too, if the situation incidentally demands that.”[9] It is necessary to emphasize that the place of worship in this case is the Prophet’s Mosque in Medina, which is the second most venerated mosque in the world.[10]

Ibn Kathir notes that what is prohibited for non-Muslims to enter is (only) the Masjid al-Haram (the Inviolable Mosque in Mecca).[11] Thus, the majority of Muslim scholars are of the opinion that non-Muslims are not allowed to visit the sacred mosque in Mecca based on an interpretation of verse 9:28 in the Qur’an.[12]

In conclusion, it is permissible to allow people of other faiths into the mosque if it serves the interests of shari’ah or meets a valid need, such as a person hearing something that may invite him to enter Islam, or because he needs to drink water in the mosque, etc. There are many benefits offered by doing this: “They could hear the speeches and sermons of the Prophet (p), see people praying and reciting Qur’an, and other benefits that are gained by those who visit the mosque.”[14]

The narratives above show the permissibility of non-Muslims entering mosques.  Also, the fact that Thumama was not forced to convert to Islam, despite being at the mercy of the Muslims, exemplifies the Qur’an’s prohibition of forceful conversion.

Commenting on the case of Thumama, Ibn Hajar lists some lessons for Muslims which include forgiving non-Muslim captives without receiving any ransom or compensation in exchange for their freedom, and how kindness to an existing enemy can eliminate hatred and bring love.[15]

Although a number of Christian or Jewish teachings are not accepted in Islam, the Prophet’s (p) actions demonstrate an exceptional degree of tolerance and respect for them especially. As earlier explained by Ibn Qayyim, Jews and Christians may be permitted to worship in their own way, even in a Muslim place of worship.

If the Prophet (p) could accommodate various people of other faiths in his Mosque, the second most sacred mosque on earth, then which other site – Muslim home, hall, mosque, or venue –  should non-Muslims be prohibited from, on account of the difference in faith?

Today, millions of non-Muslim visitors and tourists visit many great mosques across the world in Egypt, Turkey, Oman, Bahrain, and Malaysia, etc.[16] Some Muslims (and Mosque Tour Guides) leverage on this rare opportunity to educate the visitors about Islam and clarify common misconceptions they might have about the religion.

Also, the fact that the Prophet (p) welcomed non-Muslim delegates for peace talks and interfaith dialogues is proof that Muslims and people of other faith can meet in any suitable environment for promoting better mutual understanding and peaceful co-existence.[17]

[2] Ibn Kathir, Tafsir al-Qur’an al-Azim, Dar al-Tayba li al-Nashr wa al-Tawzi’i, Medina, 1999/1420AH, vol. 2, p.50; Muhammad bin Abi Bakr bin Qayyim al-Jawziyyah, Zad al-Ma’ad, Mu’assasah al-Risalah, 1994, vol.3, p.629. Regarding the narration that the Christian delegates prayed in the mosque, some scholars have questioned the strength of the narration. For example, Abdulqadir and Shuaib al-Arnaut in their editing of Zad al-Ma’ad, said that the chain is broken because Muhammad bin Jafar bin Zubayr bn Awwam, the narrator of this narration did not meet any of the companions as said by Ibn Hajar in hisTaqrib al-Tahzib, Dar al-Rashid, Halab, 1406AH, vol.1, p.1, and vol.2, p.471, no: 5782.

[13] According to scholars from the Hanafi School of Law (madhhab) however, “There is nothing wrong with non-Muslims (dhimmis) entering the Haram of Makkah (al-Masjid al-Haram) and all other mosques. This is the sound opinion in the Madhhab, as mentioned in al-Muhit of Sarakhsi.” (Al-Shaikh Nisam and a group of Indian Scholars al-Fatawa al-Hindiyyah, vol.5, p.346). See also Ibn Kathir, Tafsir al-Qur’an al-Azim, (ed. Mahmud Hassan), Dar Fikr, Beirut, 1994, vol. 2, p.422.