THE PROPHET’S (P) CONCESSIONS DURING THE TREATY OF HUDAIBIYAH 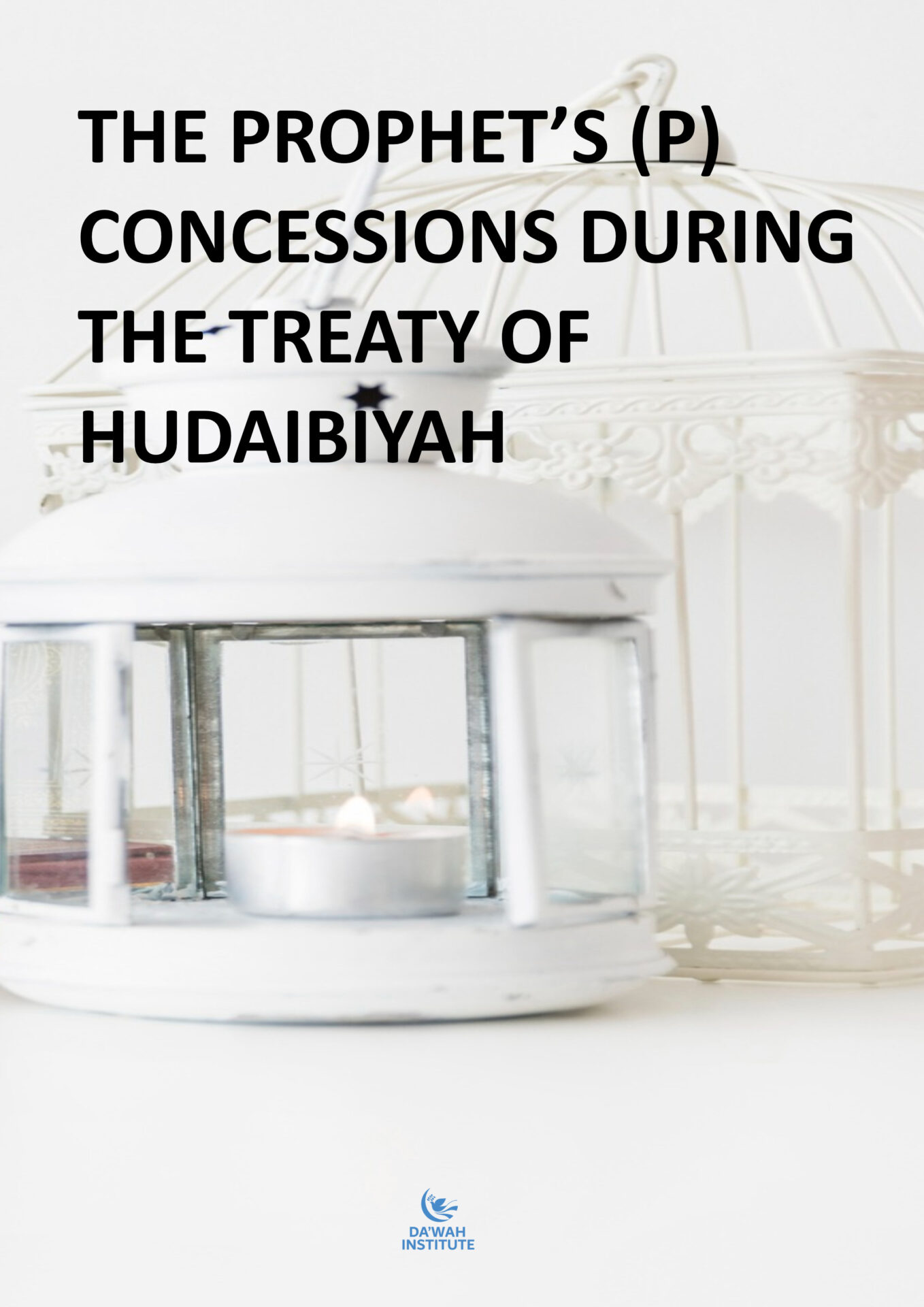 It was narrated by the companion Al-Bara’ bin ‘Azib that:

The companions of the Prophet (p), Marwan and al-Miswar bin Makhrama narrated an incident that occurred during the Treaty of Hudaibiyyah.

Suhail bin ‘Amr was the envoy and representative of the polytheists of Mecca during the Treaty of Hudaibiyyah. When he agreed to the Treaty, one of the terms he had stipulated in it then, was that the Prophet (p) would send back to them (i.e. the polytheists) anyone coming to him from Mecca, even if that person was a convert to Islam; and that the Prophet (p) would not interfere with whatever was to happen between them and that person. The Treaty also stipulated that the Meccans did not have to send back to the Muslims (or the Prophet (p)) any apostate or Muslim who wanted to leave Medina and join the polytheists of Mecca.

While the negotiations of the Treaty were ongoing, a Meccan who had just embraced Islam, Abu Jandal, and who had been persecuted by the polytheists of Mecca, arrived on the scene and pleaded with the Prophet (p) to be granted asylum and be accepted by his fellow Muslims. Abu Jandal coincidentally was also the son of the envoy Suhail bin ‘Amr. Suhail however insisted that Abu Jandal must be returned to him, as a condition to carry on with the peace negotiations.[2]

The Muslims did not like this unfair treatment and biased condition in the treaty, and some of the companions were disgusted by it. However, Suhail did not agree to sign the Treaty except with that condition. So, the Prophet (p) agreed to it and a ten-year peace treaty was signed by both parties.

From then onwards, the Prophet (p) turned back everyone that came to him from Mecca in that period (of the Treaty of Hudaibiyyah) even if he was a Muslim.[3]

Ibn Qayyim Al-Jawziyyah commented on this incident saying, “Surely the envoys/emissaries of polytheists are not to be killed. Abu Sufyan was among those who broke their treaties, yet the Prophet (p) did not kill him when he came as an ambassador of his people.”[4]

Imam Abu Ishaq al-Shatibi said: “Since it is established that the rules of the Shari’ah aim to serve human interest (maslaha), it follows that human actions should be on its basis…. When an act is legitimate in both essence and appearance, no difficulty arises. However, if an act is consistent [with the law] in appearance yet contrary to human interests, it is invalid, and anyone who acts contrary to human welfare (maslaha) is engaged in an illegitimate exercise.”[5]

Therefore, the Prophet’s (p) concessions during the Treaty had in mind the long-term and public benefit (maslaha) that could be gained from it, rather than the short-term and individual benefit (such as keeping Abu Jandal), that could be gained from not consenting to the Treaty. Also, as the ten-year Treaty period was arrived at through negotiation, Ibn Qayyim argues that this shows the permissibility of having peace treaties with non-Muslims even for a period longer than ten years.[6]

The readiness of the Prophet (p) to concede his title and the rights of Muslims during the negotiations of the Treaty of Hudaibiyyah are applications of legal maxims that were later articulated by various scholars and schools of thought under the subject of al-Qawa’id al-Fiqhiyyah. These include maxims such as the following:

In the interest of security and peaceful co-existence with the polytheist tribes of Mecca, the Prophet Muhammad (p) even after victory against the Meccans and their allies at the Battle of the Trench (Khandaq), proposed a 10-year peace treaty (referred to as the Treaty of Hudaibiyyah). He signed this treaty in the interest of greater peace for all even though it had some terms and conditions that all of his closest companions found unnecessarily compromising, humiliating and unfair to Muslims.

The Treaty of Hudaybiyyah, as well as the Sahifah (constitution) of Medina and the many treaties and alliances that the Prophet (p) and the early Muslims entered into with various communitites and nations have also laid the foundation for many similar treaties, pacts, charters, contracts, constitutions, Memorandum of Understanding (MoU), agreements and alliances that Muslim communities and nations have gone into, both domestically and internationally, for greater peace, security and public interest (maslahah). Modern examples include National constitutions (e.g the Nigerian Constitution), regional alliances (e.g. ECOWAS, European Union, ASEAN), continental charters (e.g. African Union), military alliances (e.g. NATO, WARSAW), and many others under the United Nations (UN), etc.[16]

This narrative thus counters the argument of those who say that Islam is against peaceful relations and forming alliances with people of other faiths, for the advancement of humanity. The action of the Prophet (p) and his successors show that Islam encourages mutual understanding and cooperation, including making concessions where necessary, for the sake of peace and achievement of the greater Common Good (maslaha) or lesser evil.

[2] This condition in the Treaty however was not understood to also apply to women who were escaping persecution in Mecca. When some believing women emigrants including Umm Kalthum bint ‘Uqbah bin Abu Muait came to the Messenger of Allah (p). Her relatives came to the Prophet (p) and asked him to return her, but the Prophet (p) did not return her to them for Allah had revealed the following verse regarding women: “O you who believe! When the believing women come to you as emigrants. Examine them, Allah knows best as to their belief, then if you know them as true believers, send them not back to the unbelievers, (for) they are not lawful (wives) for the disbelievers, nor are the unbelievers lawful (husbands) for them.” (Qur’an 60:10)

[16] The question of the principles that guide the terms and conditions for any contract, treaty, constitution etc are usually decided upon by the appropriate level of leadership, and is not within the scope of this discussion. These principles are very much tied to public interest and the common good (maslahah), and are treated in more detail under the principles of Qawa’aid al-Fiqhiyyah, Usul al-Fiqh and Maqasid al-Shari’ah.

« THE PROPHET (P) WOULD SWALLOW HIS ANGER WHEN PROVOKED 
THE PROPHET’S (P) FORGIVENESS OF, AND PRAYING FOR SURAQA BIN MALIK  »