Do non-Muslim citizens have a guarantee of their rights and protection in an Islamic society? 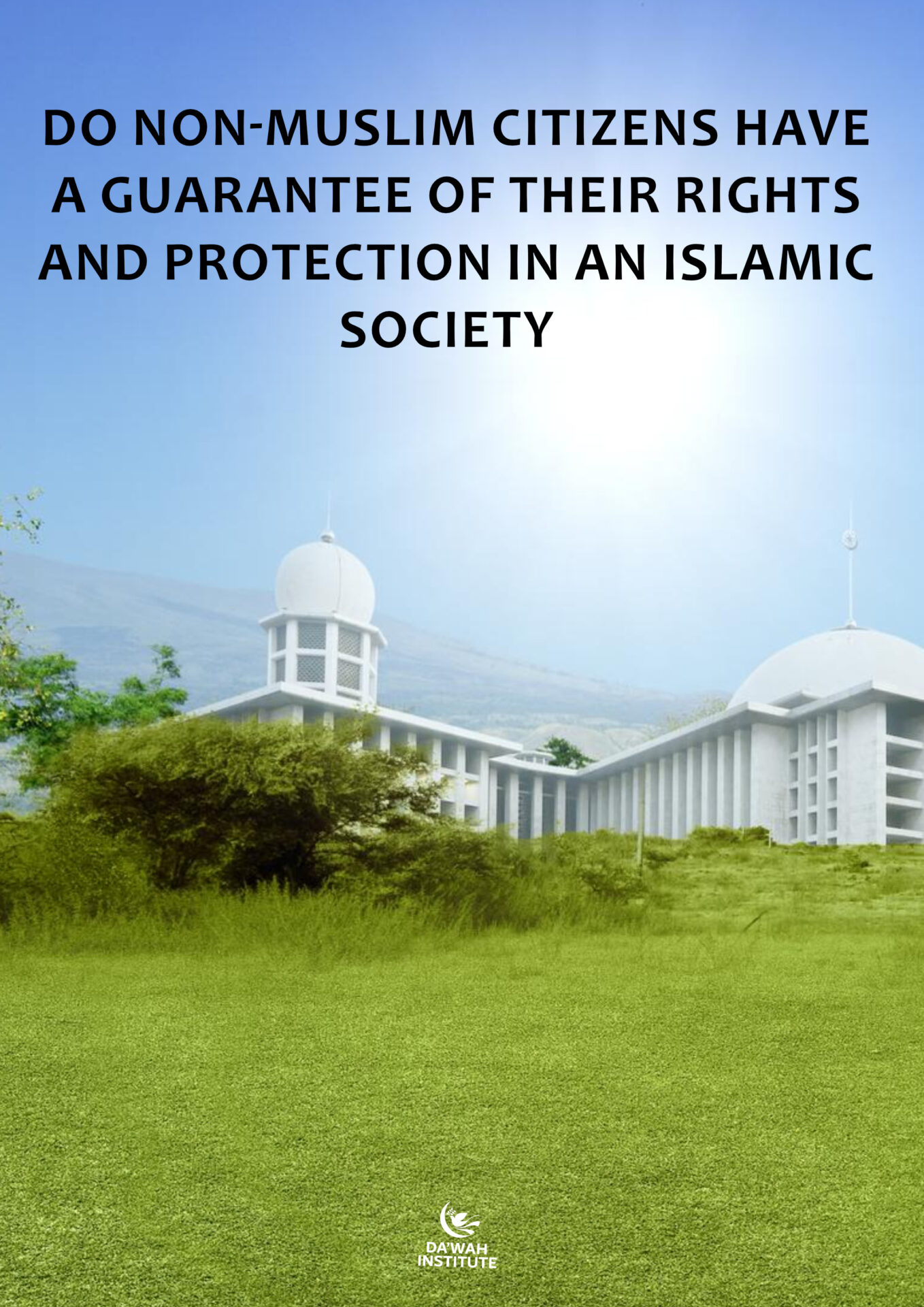 In many contemporary societies, people of various faiths and ethnicities are expected to live together as equal citizens, with the same dignity, rights, opportunities and privileges. No group should be regarded as second-class citizens, purely on account of their faiths.

Do non-Muslim citizens have a guarantee of their rights and protection in an Islamic society?

The Prophet (p) commanded that non-Muslim citizens of an “Islamic State” or State governed by Islamic principles are to be protected against internal oppression and external aggression. A non-Muslim citizen of an Islamic state is called a “Dhimmi” (i.e., protected person).[1] Historian Jane Smith writes, “Christians and Jews, along with Magians, Samaritans, Sabians, and later Zoroastrians and others, were treated as minorities under the protection of Islam (dhimmis).”[2]

Numerous hadiths enunciate the importance of upholding the rights of a dhimmi. On separate occasions, the Prophet (p) is reported to have said, “On the Day of Resurrection, I shall dispute with anyone who oppresses a person from among the People of the Covenant, or infringes on his right, or burdens him beyond his strength, or takes something from him against his will”[3]; and “Anyone who kills a person from among the people with whom there is a treaty (mu‘ahid)[4] will not smell the fragrance of Paradise, even though its fragrance extends to a walking distance of forty years.”[5]

According to Abu al-Janub al-Asadi, “A Muslim who had killed a non-Muslim under treaty (dhimmi/mu’ahid) was presented in the court of Ali. After the proof of his crime was furnished and found valid, Ali ordered him to be killed (in retribution for killing the non-Muslim). The brother of the victim came to him (Ali) and said, ‘I have pardoned him.’ Ali asked, ‘Did they (the heirs of the killer) scare you or threaten you in any way?’ the man replied, ‘No. Killing him will not bring my brother back. They offered blood money in return and I agreed to it.’ Ali said, ‘You know best; whoever is under our guarantee of protection, then his blood is like our blood, and the blood money due to him is like the blood money due to us.’”[6]

Similarly, according to Jubayr bin Nufayr, “A large amount of wealth was brought to Umar bin al-Khattab, and Abu Ubayd said, ‘I believe it was money collected from the tax levied on non-Muslim citizens.’ Umar said, ‘For certain, I fear you have destroyed many people!’ They (the tax collectors) said, ‘No, by Allah! We have taken only the surplus to their needs with tenderness and ease.’ Umar inquires, ‘Was it acquired without recourse to a whip or coercion?’ They replied, ‘Yes’. He said, ‘All praise is due to Allah, Who did not put that (oppression) on my hands or during my rule.'”[7]

In the same vein, Ibn Taymiyah holds that the ‘achievement of justice’ in a state as most fundamental and deserving of God’s support, even for a ‘nation of disbelievers’. According to the renowned scholar:

“In this life, people’s situations uphold when justice prevails in their society even if they fall into various kinds of sins. However, people’s situations do not uphold when injustice and lack of rights prevail in their society. That is why the saying goes: ‘God upholds a state established on justice, even if it were a nation of disbelievers, and would not uphold a state established on injustice, even if it were a nation of Muslims.’ The other saying goes: ‘This world lives with justice and disbelief, and does not live with injustice and Islam.’ The Prophet, peace be upon him, had said: ‘No sin has a faster Divine punishment than the sin of injustice…’. Thus, people of injustice fail in this life, even if they were to be forgiven in the hereafter. This is because justice is the universal law of things.[8]

From the hadith cited earlier, closely related to the concern for justice is also that of security for all citizens. For example, Imam Abu Hanifa states:  “The purpose (maqsud) of calling a certain land a ‘Land of Islam’ or a ‘land of disbelief (kufr)’ is not Islam versus kufr. It is security versus insecurity.”[9]

It is therefore required for the State to ensure the highest standards of justice and security for all, and that it upholds the principle that “they enjoy the same rights we enjoy.”[10]  For example, Khalid ibn al-Walid, in his famous “Covenant of Peace” with the people of Hirah, wrote:

“I have stipulated that if any one of them becomes unfit to work on account of old age or for some other reason, or if anyone who was formerly rich becomes so poor that his co-religionists have to support him, then all such persons will be exempted from paying the jizya[11] and they, together with their dependents, will get a pension from the Islamic Treasury as long as they choose to reside in the Islamic state.”[12]

“The specifics of the requirements for Christians who enjoyed dhimmi status were spelt out in what has come to be referred to as ‘the covenant of Umar,’ which exists in several versions and most likely was attributed to rather than designed by the second caliph, Umar ibn al-Khattab (r. 634-44). The covenant stipulated prohibition of the building of new churches or repair of those in towns inhabited by Muslims, although in some cases when financing was available Christians did construct new places of worship… Dhimmis were allowed to keep their own communal laws, although they could apply to a Muslim judge if they wished…. Christians occupied high positions in the caliphal courts as physicians, engineers, architects, and translators, and sometimes they were treated as having virtually equal rights with Muslims. Muslim writers and poets sometimes gave great tributes to Christians in their literature.”[13]

It is true that Muslim administrations, however, have at times imposed some inequitable conditions and restrictions upon dhimmi communities. Smith states that this may be explained by the fact that after the lifetime of the early caliphs, the:

“…dhimmi status seems to have been a changing one, in that laws were made and either broken or forgotten… never free from the whims of individual rulers who might choose to enforce strict regulations, or from the caprice of mobs expressing their passions in prejudicial and harmful ways [as may be observed even today in the policies of non-Muslim dominated nations towards their minorities]. In general, the first Arab Muslim dynasty, that of the Umayyads, was fairly flexible in terms of its Christian citizens, but in Islam’s second century the laws became more stringent. Under the reign of the caliph al-Mutawakkil (r. 847-61), laws against dhimmis were most severe, sometimes resulting in persecution of Christians as well as of Mu’tazilis, Shiites, and others [Muslim sects] considered opponents of the state. Through the Middle Ages there was a hardening of attitudes against dhimmis, due more to political than to religious reasons, especially after the period of the Crusades.”[14]

Despite these changing attitudes of rulers and the Muslim masses, knowledge of the implicit rights of dhimmis in an Islamic state compelled other Muslims to campaign for justice.  Examples of this include the fervent protest of the public, led by Muslim jurists, against the Caliph Walid ibn Yazid when he exiled non-Muslim citizens of Cyprus to Syria[15]; and the reprimand sent by Imam al-Awza’i to the Governor of Lebanon who exiled some non-Muslim civilians that lived in the same areas as some armed rebels.

The following extract from the letter that he (Imam al-Awza’i) wrote to him (the Governor of Lebanon) speaks for itself:

“Dhimmis of the hill-tracts of Lebanon have been exiled and you know the fact. Amongst them are men who had not taken part in the revolt. I fail to understand why common people should be punished for the sins of particular individuals and be deprived of their homes and properties. The Qur’anic injunction is quite clear that ultimately everybody will have to account for his own actions and nobody shall be held responsible for anybody else’s actions. This is an eternal and universal injunction, and the best advice, therefore, that I can give to you is to remind you of one of the directives of God’s Prophet that he himself will stand up as plaintiff against all such Muslims who are unkind to those non-Muslims who have entered into an agreement with them, and tax them beyond endurance.”[16]

“If the enemy of a dhimmi comes with his forces to take him, it is our obligation to fight this enemy with soldiers and weapons and to give our lives for him, thus honouring the guarantee of Allah and His Messenger (p). To hand him over to the enemy would mean to dishonour this guarantee.”[18]

[1] Jews and Christians were the earliest dhimmis, though the status was one that the Prophet (p) also later afforded to Zoroastrians and then Sabians. (Murad Wilfried Hofmann, Protection of Religious Minorities in Islam, Leicester, UK: The Islamic Foundation, 1998.) As the Muslim sultanates and empires grew to lands of other faiths, a dhimmi evolved to being virtually any non-Muslim who agreed to live under a Muslim government. This is all too evident in the fact that the Caliph Umar’s assassination was perpetrated by Abu Lulu’ah, the Zoroastrian, who was a dhimmi! (Sa’id Ramadan, Islamic Law: Its Scope and Equity,: Macmillan, London, 1961, p.121).

[2] Jane I. Smith, “Islam and Christendom: Historical, Cultural and Religious Interaction from the Seventh to the Fifteenth Centuries” in The Oxford History of Islam. Ed. John L. Esposito, Oxford University Press, Oxford, 1999, p.307

[4] The term mu’ahid is used for an approved non-Muslim visitor from another state, as distinct from a dhimmi who is a citizen of the Islamic territory (Al-Shawkani, Nayl al-Awtar, vol.7, p.14; cited in Sa’id Ramadan, Islamic Law: Its Scope and Equity, Macmillan, London, 1961, pp.109-110).

[11] A tribute and military exemption tax paid by able-bodied, male, non-clergy, non-Muslim subjects of an Islamic state, in lieu of having to join the army.  Exemptions to women, children, elderly, monks, and those who join the Muslim army are evidence that the tax is not a fine for disbelief as some have postulated (Sa’id Ramadan, Islamic Law: Its Scope and Equity, Macmillan, London, 1961, p.123.)