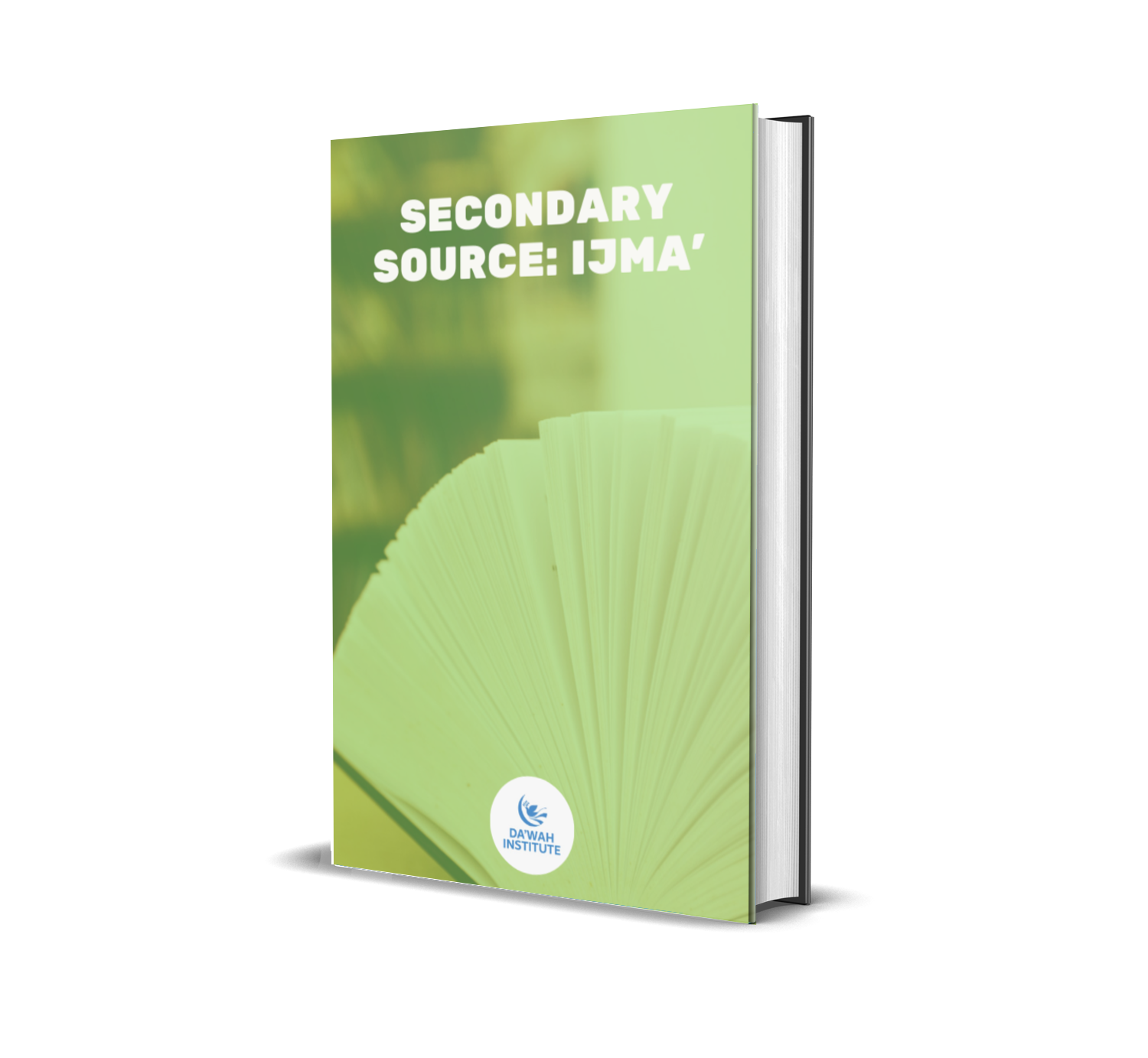 There are several secondary sources of evidence or tools for Ijtihad (juristic reasoning and deduction of rulings). One is Ijma’: a consensus of opinion. This consensus could mean, to various scholars, either unanimous or majority opinion.[1]

The majority of scholars view ijma’ as a “rational proof” and the third source of Islamic law after the Qur’an and Sunnah when there is an absence of any textual evidence.[2] If ijma’ is resorted to as a third independent authoritative source of legislation and only in the absence of clear textual evidence from the Qur’an or Sunnah, then such an ijma’ must have been arrived at by ijtihad, hence its description as a “rational proof” and described by some scholars as consensus of collective ijtihad (ijtihad jama’iy).[3] There is safety in numbers! However, an ijma’ or a consensus that is arrived at by the collective ijtihad of scholars in a particular context and which is established based on secondary sources of Shari’ah such as local custom (‘Urf) or “public interest” (Maslahah), etc. is naturally bound to change as the customs, priorities and interests of the communities concerned also evolve and change.[4] This calls for serious caution in blindly holding on to a conclusion based on ijma’ but without understanding the nature of the evidence for it and how such a consensus was arrived at.[5]

If all of the distinguished jurists (mujtahidun) happened to arrive at one particular ruling on a certain issue, this agreement was referred to as ijma’ (consensus). But as this happened only rarely, such distinguished jurists as Imam Ahmad ibn Hanbal believed that ijma’ was feasible only in matters for which specific evidence is explicit in the Qur’an or the Prophet’s sunnah.[6] According to this view, the only ijma’ likely to take place was the ijma’ held by a particular legal school,[7] or group of people,[8] or ijma’ confined to particular localities.[9]

Scholars therefore, differ on the definition, the feasibility or way of determining and ascertaining how a “consensus” is reached, the level of certainty it gives, how it was to be used, its authority and binding nature, etc.[10] It is partly due to their concern over the feasibility of ijma’ that according to Imam Ahmad ibn Hanbal, ijma’ refers to the consensus of the Companions alone. Imam Malik on the other hand confines ijma` to that of the people of Madinah.[11] According to the Shafi’ jurist Imam al-Haramayn al-Juwayni, Ijma’ is the agreement by the jurists of a generation on a case of Sacred Law, and it is binding upon the next generation.[12]

So, despite the great many differences over the very definition of ijma’ (consensus), as previously explained, many past and present jurists considered it “an evidence as certain as the script” (dalilun qat’iyyun kal-nass), “an evidence constructed by The Legislator” (dalilun nasabah al-Shari’), and even counted its rejectors amongst “infidels” (jahdi al-ijma’I kafir).[13] This effectively has resulted in blurring the lines and levels of authority between the position of Allah and His Messanger on the one hand, and that of the “consensus” of others. [14]

According to some scholars, a ruling of ijma’ may have reached us by continuous multiple testimony (tawatur) in which case they would regard it as definitely proven (qat’i al-thubut) and similar to the Maliki “Amal of Medina” (to be discussed in Lesson 14).[15] But when ijma’ is transmitted through solitary reports, its authenticity would be open to doubt and therefore of only presumptive authority (zanni al-thubut).[16] Therefore it is not sufficient in the view of these scholars that there exists a claim of ijma’ (of whatever definition and feasibility) on an issue, it is also has to be proven (as with hadith narrations) that such as claim in definitely authentic and corroborated with multiple independent claims.

Some scholars also regard as ijma’ the consensus on issues upon which there is no known dissent concerning the meaning or implication (dilalah) of the text of the Qur’an or Sunnah.[17] Consequently, the determination of whether a particular text is explicitly clear (qat’i) or speculative (zanni) in its meaning and implication (dilalah) is determined by the existence of ijma’ or absence of recognized dissent (khilaf). Ijma’ in this sense therefore has the benefit of giving greater certainty and authority to an interpretation of the text and the rulings or verdicts (fatwa) arrived at. Others would argue that this so-called “ijma’” is merely complete agreement on the interpretation of an existing text of the Qur’an or Sunnah, and not an independent source of jurisprudence or law when the text is silent or ambiguous, which real Ijma’ is described as by the majority of its proponents. According to Ibn Hazm’s, “matters of consensus are either explicitly mentioned in the Qur’an or most famous hadith, or otherwise, matters of difference of opinion over some interpretation or ahad narration. In the first case, the verses or hadith do not need consensus for evidence, since they are primary evidences in their own right. In the second case, consensus is untruly claimed.” He argued: “consensus could never be proven, even if it were to be restricted to the companions, whose number was in the thousands.”[18]

Like the word Sunnah (as we shall see in Lessons 28 and 29), Ijma’ constitutes a loaded, or “complex term”. Attention must therefore be paid to how particular jurists and their schools defined and used it. Moreover the concept of consensus in Islamic legal history must always be juxtaposed against the phenomenon of dissent, which served as the index by which jurists generally determined the contents of their general agreement. Ijma’ could be regarded as the absence of known or recognized dissent.[19]

The authority of ijma’ is often derived from the following evidence:

And anyone who splits off from the Messenger after the guidance has become clear to him and follows a way other than that of the believers, We shall leave him in the path he has chosen, and land him in Hell. What an evil refuge!  (Qur’an 4:115)

…If they would only refer it to the Messenger and those among them who hold authority, those of them who seek its meaning would have found it out from them. (Qur’an 4:83)

O you who believe, obey Allah and obey the Messenger, and those placed in authority over you”. (Qur’an 4:59)

And among those We created is a community which guides by truth and thereby establishes justice (Qur’an 7:181)

Ali was reported to have said that, “I said, O Messenger of Allah; an issue might arise (after you) which has no justification from Qur’an, and which no tradition from you has come to prove.” The prophet (ﷺ) said: “Gather on it (i.e. the new issue) the scholars or he said the true worshippers among the believers, and mutually consult among yourselves, and do not base your judgment of it on one man’s opinions”.[20]

Other hadith include: “My Ummah will not agree on error.[21] Allah’s hand is with community (jama’ah)” [22]; “Those who seek the joy of residing in Paradise will follow the community of Muslims. For Satan can chase an individual, but he stands farther away from two people” [23]; “The hand of God is with the community, and (its safety) is not endangered by isolated oppositions” [24]; “Whoever leaves the community or separates himself from it by the length of a handspan is breaking his bond with Islam”[25]; “Whoever separates himself from the community and dies, dies the death of (People of) Ignorance (jahiliyyah)”[26]; Abdullah Bin Masud said: “Whatever the Muslims consider good is good in the eye of Allah, and whatever they consider evil is evil in the eyes of Allah”.[27]

Having discussed the evidence in the ahadith relating to ijma’, Ahmad Hasan observes that they are inconclusive and do not amount to authoritative textual evidence for Ijma’. “All of them emphasise unity and integration. Some of them are predictive and others circumstantial: They may mean ijma’, or something else.’ Hence the argument that they provide the authority for ijma’ is ‘definitely subjective’. The same author elaborates that: “There was no idea of ijma’ as a doctrine of jurisprudence in the early period; The jurists could not determine a definite meaning for ‘ummah’ or Jama’ah ; and Ahadith which convey a general meaning should not be restricted to a particular point of view.” [28]

According to Kamali however, notwithstanding the doubts and uncertainties in the texts (nusus) used to give authority to Ijma’, “the majority of ulema have concluded that the consensus of all the mujtahidun on a particular ruling is a sure indication that the word of truth has prevailed over their differences; that it is due to the strength of that truth that they have reached a consensus. This rational argument in support of ijma’ has been further advanced to the effect that consensus upon a shar’i ruling is bound to be founded on sound ijtihad. In exercising ijtihad, the mujtahid is normally guided by certain rules and guidelines. Ijtihad often consists of an interpretation of the text (nass), or of a rational extension of its ruling. Even in the absence of a nass, ijtihad still observes both the letter and spirit of the sources which the mujtahid has mastered through his general knowledge. Since ijtihad is founded on sound authority in the first place, the unanimous agreement of all the mujtahidun on a particular ruling indicates that there is clear authority in the Shari’ah to sustain their consensus. In the event of this authority being weak or speculative, we can only expect disagreement (ikhtilaf), which would automatically preclude consensus. Ijma’ in other words, accounts for its own authority.”[29]

Consequently, while there is a general concensus in principle on the validity and authority of Ijma’, it is when it is to be demonstrated in practise on a specific case that differences of definitions and perspectives on Ijma’ begin to become clearer. It has therefore been argued by some that in view of the differences over the concept of Ijma’, that it be viewed not strictly as a “source of law”, but more as a mechanism of consultation or “multiple participant decision-making” by key competent stakeholders.[30]

Examples of issues on which some have claimed there is an ijma’ include the opinion that intentional laughter during Salat invalidates the Salat;[31] that intentionally missed prayers must be made up; that a woman’s leadership is prohibited; the punishment for leaving Islam (apostasy) is fixed (hadd) capital punishment; that the pronouncement of talaq (divorce) three times at one sitting is valid as terminal; and that slaughtering an animal without mentioning Allah’s name is unlawful.[32]

It should be noted that, despite the claims by some that an ijma’ exists on these issues, a number of classical jurists have in fact differed on these topics. The claimed Ijma’ on these might therefore simply have meant “consensus due to unknown or unrecognized dissent”. [33]

As Auda notes, readers familiar with traditional fiqh literature know that an ijma’ is often claimed by some, in rulings of clear difference of opinion, in order to sanction one opinion or the other.This has the effect of monopolising fatwa-making.[34]

Another challenge with the concept of ijma’ among scholars of the past, is that it is unfortunately often used by some as proof or supportive evidence for a particular position – especially when related to social, political or economic issues – without due regard to the obvious historical differences in their underlying circumstances. This is effectively using an ijma’ out of its proper context. This use (or misuse!) of ijma’ often hinders research by such scholars and prevents many from addressing various issues from a contemporary and realistic perspective. This in turn contributes to “inflexibility” in Islamic law, in terms of creative responses to new circumstances and questions based on original analyses of primary texts.[35] This is how ijma’ has sometimes been used to keep the so-called “doors of ijtihad” closed on some issues.