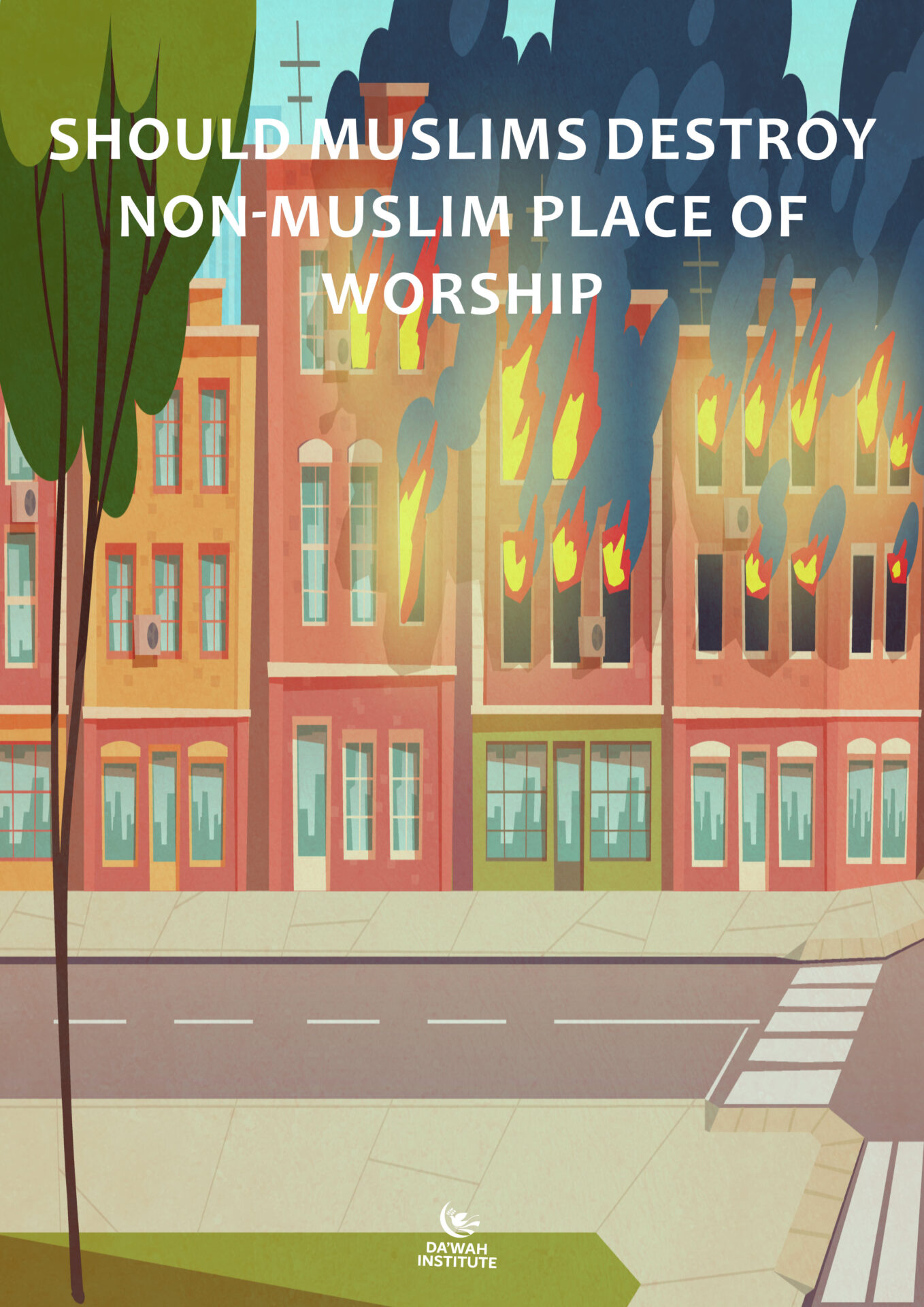 In recent times, places of worship, holy sites, and sacred spaces have been desecrated, bombed or destroyed, in the name of religion, in various conflicts. Sometimes, Muslims have been involved in destroying, but also in protecting churches, synagogues, etc.

Are Muslims allowed to destroy churches and other non-Muslim places of worship?

Islam respects the rights of people of other faiths to practice their own religious beliefs (Qur’an 5:48-49). Jews and Christians, for example, are respected as People of Scripture (Ahl al-Kitab), and their right to their places of worship must be respected.

The Qur’an prohibits anyone from destroying monasteries, churches, synagogues or mosques. Qur’an 22:39-40 says, “Permission is given to those who fight because they have been oppressed…For had it not been for God’s repelling some men by means of others, (all) monasteries, churches, synagogues, and mosques, wherein the name of God is often mentioned, would certainly have been destroyed…”

Based on this verse of the Qur’an, great scholars such as Ibn Hazm hold that Muslims are even required to fight if necessary, to defend these non-Muslim places of worship from being destroyed.[1]

The continued existence of numerous monasteries, sacred grounds and places of worship belonging to Christians, Jews, Zoroastrians, Hindus, Buddhists, etc., in places that have once been or still are completely under Muslim rule shows the respect that Islam has for the rights of others to their respective faiths and places of worship.[2]

This spirit can be seen in display in the letter of the first Caliph of Islam Abu Bakr Siddiq to the non-Muslims of Najran. In the letter, the Caliph wrote:

“In the name of God, the Beneficent, the Merciful. This is the written statement of God’s slave Abu Bakr, the successor of Muhammad, the Prophet and Messenger of God.  He affirms for you the rights of a protected neighbour, in yourselves, your lands, your religious community, your wealth, retainers, and servants, those of you who are present or abroad, your bishops and monks, and monasteries, and all that you own, be it great or small.  You shall not be deprived of any of it, and shall have full control over it…”[3]

In a similar vein, the treaty of the second Caliph of Islam, Umar ibn al-Khattab, with the people of Iliya of Jerusalem reinforces this fact. In it, he states that:

“This is the security given by the slave of God, Umar, the Commander of the Faithful, to the people of Iliya: they are guaranteed the security in their persons, possessions, churches, crucifixes, and everyone within, whether sick or in good health, as well as everyone in their community.  Their churches will not be occupied or demolished, nor will anything be taken from them: neither furnishings nor crucifixes or money.  They will not be forced away from their religion, or harmed because of it….” [4]

As a result, since the era of the “Rightly-guided Caliphs”, Jews and Christians have held their services in freedom and security.[5]

The above ideals of Islam held by Muslims did not always end up in speeches or on paper. They were actually displayed by the rightly guided Muslim leaders when they conquered non-Muslim lands.  For example, one of the Muslim caliphs, Abdul-Malik, took the Church of Saint John from the Christians and made it part of a mosque.  When Umar bin Abdul-Aziz succeeded him as the new Caliph, the Christians complained to him about what his predecessor had done to their church.  Umar wrote to the governor that the portion of the mosque that was rightfully theirs be returned to them if they were unable to agree with the governor on a monetary settlement that would satisfy them.[6]

The Wailing Wall in Jerusalem is known to historians to be one of the holiest places of worship in Judaism.   It was completely buried under rubble and heaps of debris during the era of the Ottoman caliph, Sultan Sulayman I (1494-1566).  When the caliph came to know of this, he ordered his governor in Jerusalem to remove all the rubble and debris, clean the area, restore the Wailing Wall, and make it accessible for Jews to visit.[7]

The respect Islam enjoins on Muslims towards non-Muslims with regard to protecting their various places of worship can be testified to by non-Muslims, some of whom though are ardent critics of Islam and Muslims are objective enough to tell the truth as it is.

The Christian Patriarch Ghaytho wrote about the Arab of his time:

“The Arabs, to whom the Lord has given control over the world, treat us as you know; they are not the enemies of Christians.  Indeed, they praise our community, and treat our priests and saints with dignity, and offer aid to churches and monasteries.”[8]

Also the Historian, Will Durant wrote:

“At the time of the Umayyad caliphate, the People of the Covenant, Christians, Zoroastrians, Jews, and Sabians, all enjoyed a degree of tolerance that we do not find even today in Christian countries.  They were free to practice the rituals of their religion and their churches and temples were preserved.  They enjoyed autonomy in that they were subject to the religious laws of their scholars and judges.”[9]

“The tolerance of Muhammad towards the Jews and Christians was truly grand; the founders of other religions that appeared before him, Judaism and Christianity in particular, did not prescribe such goodwill.  His caliphs followed the same policy, and his tolerance has been acknowledged by skeptics and believers alike when they study the history of the Arabs in depth.”[10]

“The caliph Umar took the utmost care to tend to the sanctity of the Christian holy places, and those who became caliph after him followed his footsteps.  They did not harass the many denominations of pilgrims who came annually from every corner of the Christian world to visit Jerusalem.”[11]

Thus, the bombing and burning of non-Muslim places of worship that we witness today are misguided and criminal acts which are blameworthy and condemned by Islam. This is because Allah prohibits (forbids) not only the destruction of the churches, monasteries and synagogues of non-Muslims, but He also prohibits reviling the gods and deities of even idol worshippers. This prohibition from Allah goes beyond prohibition of destruction to full protection by Muslims and government forces. Whenever people of other faiths living peacefully and in harmony with the Muslims are being oppressed even by Muslims, it is the duty of all God-fearing Muslims and their government to protect them.

« Muslims as Minorities
Sanctity of Every Human Life »