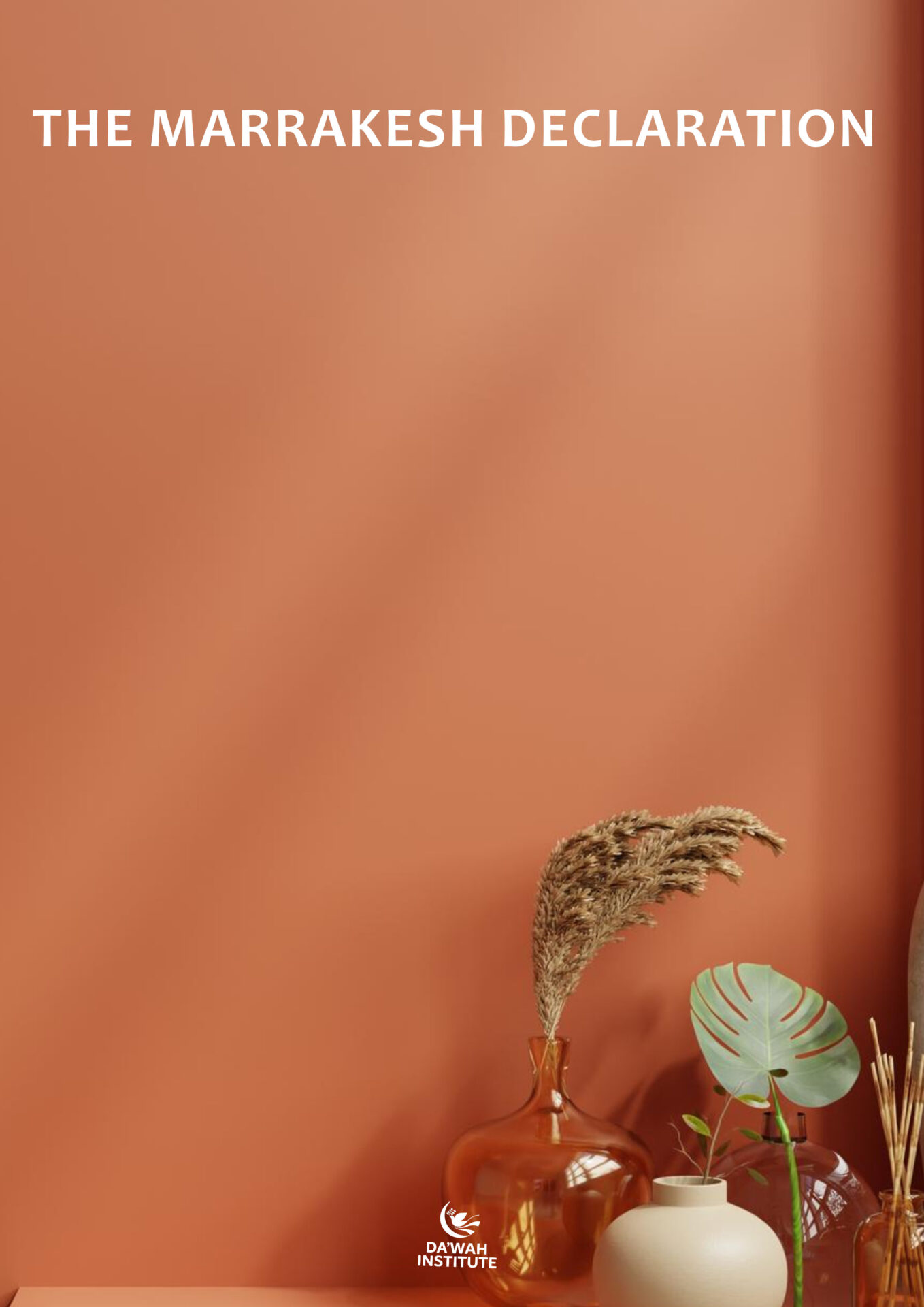 Muslims jurists and scholars have in different periods of Islamic history and in various parts of the world held some diverse rulings related to Non-Muslims (Ahkam Ahl al-Dhimmah). What guidelines and principles do Muslims today have for their more different, contemporary and rapidly changing and challenging contexts?

What is the “Marrakesh Declaration on the Rights of Religious Minorities in Predominantly Muslim Majority Communities”?

Jurists throughout Islamic history have recognized the need for certain Islamic legal rulings to continue to evolve and adapt to changing contexts in order to remain relevant and more effectively protect and promote the objectives (maqasid) of Shari’ah – accruing benefits and the common good (maslahah) and preventing harm (mafsadah). A legal maxim to this effect states that – “With change in circumstances, comes change in fatwa.”[1]

The concept of dhimma (protection) was a pre-Islamic one in which a larger and more powerful tribe or clan gave protection to a weaker one under certain terms and conditions. This was modified by the Prophet (p) to be based on a religious and not ethnic identity, and in line with the values of justice, respect and compassion as applicable to a particular context. In contemporary society, the concept of “citizenship” has become increasingly more popular.

In line with this, hundreds of some of the most respected Muslim scholars and intellectuals from over 120 countries gathered from the 25th – 27th of January, 2016 in Marrakesh, Morocco, to prepare – as the name itself clarifies – the “Marrakesh Declaration on the Rights of Religious Minorities in Predominantly Muslim Majority Communities”. [2]

Below is the Executive Summary of what is now commonly referred to as the “Marrakesh Declaration”. It articulates some of the new changes and challenges faced by Muslim communities that call for such a new “Declaration”, and the recommended principles that should guide relations with fellow citizens belonging to other faiths, based on the same principles as that of the Medinan Charter at the time of the Prophet (p). In other words, this declaration represents the foundation and framework for the articulation of any contemporary version of the “Rulings related to Non-Muslim Citizens” (“Ahkam Ahl al-Dhimmah”) for Muslim communities today.

Executive Summary of the Marrakesh Declaration on the Rights of Religious Minorities in Predominantly Muslim Majority Communities (25th-27th January, 2016)

“WHEREAS, conditions in various parts of the Muslim World have deteriorated dangerously due to the use of violence and armed struggle as a tool for settling conflicts and imposing one’s point of view;

WHEREAS, this situation has also weakened the authority of legitimate governments and enabled criminal groups to issue edicts attributed to Islam, but which, in fact, alarmingly distort its fundamental principles and goals in ways that have seriously harmed the population as a whole;

WHEREAS, this year marks the 1,400th anniversary of the Charter of Medina, a constitutional contract between the Prophet Muhammad, God’s peace and blessings be upon him, and the people of Medina, which guaranteed the religious liberty of all, regardless of faith;

WHEREAS, hundreds of Muslim scholars and intellectuals from over 120 countries, along with representatives of Islamic and international organizations, as well as leaders from diverse religious groups and nationalities, gathered in Marrakesh on this date to reaffirm the principles of the Charter of Medina at a major conference;

WHEREAS, this conference was held under the auspices of His Majesty, King Mohammed VI of Morocco, and organized jointly by the Ministry of Endowment and Islamic Affairs in the Kingdom of Morocco and the Forum for Promoting Peace in Muslim Societies based in the United Arab Emirates;

AND NOTING the gravity of this situation afflicting Muslims as well as peoples of other faiths throughout the world, and after thorough deliberation and discussion, the convened Muslim scholars and intellectuals:

DECLARE HEREBY our firm commitment to the principles articulated in the Charter of Medina, whose provisions contained a number of the principles of constitutional contractual citizenship, such as freedom of movement, property ownership, mutual solidarity and defense, as well as principles of justice and equality before the law; and that,

The objectives of the Charter of Medina provide a suitable framework for national constitutions in countries with Muslim majorities, and the United Nations Charter and related documents, such as the Universal Declaration of Human Rights, are in harmony with the Charter of Medina, including consideration for public order.

NOTING FURTHER that deep reflection upon the various crises afflicting humanity underscores the inevitable and urgent need for cooperation among all religious groups, we

BASED ON ALL OF THE ABOVE, we hereby:

Call upon Muslim scholars and intellectuals around the world to develop a jurisprudence of the concept of “citizenship” which is inclusive of diverse groups. Such jurisprudence shall be rooted in Islamic tradition and principles and mindful of global changes.

Urge Muslim educational institutions and authorities to conduct a courageous review of educational curricula that addresses honestly and effectively any material that instigates aggression and extremism, leads to war and chaos, and results in the destruction of our shared societies;

Call upon politicians and decision makers to take the political and legal steps necessary to establish a constitutional contractual relationship among its citizens, and to support all formulations and initiatives that aim to fortify relations and understanding among the various religious groups in the Muslim World;

Call upon the educated, artistic, and creative members of our societies, as well as organizations of civil society, to establish a broad movement for the just treatment of religious minorities in Muslim countries and to raise awareness as to their rights, and to work together to ensure the success of these efforts.

Call upon the various religious groups bound by the same national fabric to address their mutual state of selective amnesia that blocks memories of centuries of joint and shared living on the same land; we call upon them to rebuild the past by reviving this tradition of conviviality, and restoring our shared trust that has been eroded by extremists using acts of terror and aggression;

Call upon representatives of the various religions, sects and denominations to confront all forms of religious bigotry, vilification, and denigration of what people hold sacred, as well as all speech that promote hatred and bigotry; AND FINALLY,

AFFIRM that it is unconscionable to employ religion for the purpose of aggressing upon the rights of religious minorities in Muslim countries.”

« Do non-Muslim citizens have a guarantee of their rights and protection in an Islamic society?
Muslims as Minorities »