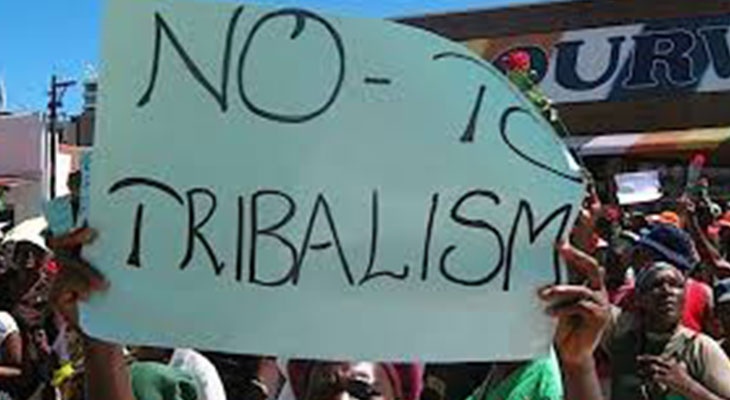 Allah reminds us in the Qur’an:

“O you who have attained to faith! Be ever steadfast in upholding justice, bearing witness to the truth for the sake of Allah, even though it be against your own selves, or your parents and kinsfolk. Whether the person concerned be rich or poor, Allah’s claim takes precedence over (the claims of) either of them. Do not, then, follow your own desires, lest you swerve from justice; for if you distort (the truth), behold, Allah is indeed aware of all that you do!” (Qur’an 4:135)

“O you who have attained to faith! Be ever steadfast in your devotion to Allah, bearing witness to the truth in all equity; and never let hatred of anyone lead you into the sin of deviating from justice. Be just; this is closest to being God-conscious. And remain conscious of Allah; verily, Allah is aware of all that you do.” (Qur’an 5:8)

The recent waves of verbal attacks that have permeated the country, with different groups calling for the ‘heads’ of others based on their ethnicity or region is quite worrisome. The dangers that this portends include nepotism, unnecessary suspicions, misunderstandings and mistrust, disharmony, and perhaps bloodshed! A challenge of this nature, if left unattended, can lead to disastrous consequences for the country, hence this short piece.

Muslims need to wake up to Allah’s warning and “Beware of discord that harms not only the wrongdoers among you: know that Allah is severe in His punishment.” (Qur’an 8:25)

The ‘asabiyyah (“tribalism”) which Islam condemns, refers to the feeling that one’s tribe (or any other social solidarity or grouping – the clan, nation, region, ethnicity, race, etc.) is superior to another or to all others. It is often accompanied by having disdain for and looking down on people from other tribes; and it often leads to discouraging association with people from the other tribes deemed inferior either through work, marriage, friendship, etc.

A number of factors may lead to a feeling of superiority over people of other tribes, one of which is history. Many have a perceived superiority of their ethnic lineage as a result of the conquests or achievements of their forebears. Others become sentimental because of their geographical proximity to natural resources and power, using this to their advantage. Other reasons include materialism and ignorance of religious teachings.

Thus, the fuel for ‘asabiyyah is the feeling of being better than others – superiority complex and arrogance. This corrupted form of thinking is seen in Iblis (Satan). It caused him to disobey Allah’s commandment to bow for Adam saying, “I am better than him. You created me from fire and You created him from clay” (Qur’an 7:12). Warning against this attitude, the Prophet (pbuh) said “No one enters Paradise if they have in their heart a grain’s weight of arrogance.” (Sahih Muslim, 91:147)

Therefore, Islam categorically forbids all forms of racial, national, tribal or ethnic superiority, both in the Qur’an and the Sunnah. Allah says in the Glorious Qur’an: “O Mankind, We created you from a single (pair) of a male and a female and made you into nations and tribes, that you may know each other. Verily the most honored of you in the sight of Allah is he who is the most righteous (taqwah) of you” (Quran 49:13).

He also says: “And among His Signs is the creation of the heavens and the earth, and the difference of your languages and colours. Verily, in that are indeed signs for men of sound knowledge.” (Q30:22)

These verses prove that the distinction in color, language, ethnicity, nationality, and race of man is just for the purpose of identification, not to prove superiority of one over another; thus, while we should be grateful to Allah and proud of what race, nation, tribe or clan He might have chosen for each one of us, we should never allow that gift and opportunity to be a criteria for right and wrong, good or bad, superiority or inferiority. To Allah, human superiority is only on the basis of piety and God-consciousness (tawqah), which cannot be determined or measured by any other than Allah.

Allah also says: “We have certainly honoured the children of Adam and carried them on the land and sea and provided for them of the good things and preferred them over much of what We have created, with definite preference” (Q17:70)

This shows that every human is a dignified and honoured being, irrespective of tribal or religious affiliation, and should be thus treated.

He (pbuh) also said “Whoever fights under a banner of folly, supporting tribalism, or getting angry for the sake of tribalism, he dies in a state of ignorance (Jahiliyyah).”[4] And in another Hadith, also referring to nationalism, racism, and patriotism He said: “Leave it, it is rotten.”[5]

Also, the Prophet (pbuh) is reported to have said, “Behold, Allah has removed from you the arrogance of pagan ignorance (jahiliyyah) with its boasts of ancestral glories. Man is but a God-conscious believer or an unfortunate sinner. All people are children of Adam, and Adam was created out of dust.”[6]

Allah said in the Qur’an, “O you who believe! Stand out firmly for Allah as just witnesses; and let not the enmity and hatred of others make you avoid justice. Be just: that is nearer to piety; and fear Allah. Verily, Allah is Well-Acquainted with what you do” (Qur’an 5:6). Therefore, it is necessary to be fair and just in dealing with everyone, irrespective of creed, tribe, region or race.

The prophet (pbuh) in his characteristic justice, did not fail to correct his companions, or even his beloved wife, when they became partisan. On the authority of al-Ma’rur bin Suwayd, he said: We passed by Abu Dharr in Rabadha…Abu Dharr said, “I had a quarrel with one of my brethren whose mother was of foreign descent, so I vilified him as “you son of a black mother”. He went to complain about me to the Prophet. When the Prophet met me (one day), he said, ‘Abu Dharr, you are someone who still displays Jahiliyyah”.[7]

Similarly, Jabir bin Abdullah reported that two young men, one from the Muhajirun (emigrants from Mecca) and the other one from the Ansar (helpers of Medina) fell into dispute and the Muhajir called his fellow Muhajirun, and the Ansari (the helper) called the Ansar (for help). In the meantime, Allah’s Messenger (pbuh) came there and said: “What is this, the proclamation of the days of Jahiliyah (ignorance)? They said: Allah’s Messenger, there is nothing serious. The two young men fell into dispute and the one struck at the back of the other. Thereupon he (the Holy Prophet) said: Well, a person should help his brother whether he is an oppressor or an oppressed. If he is the oppressor he should prevent him from doing it, for that is his help; and if he is the oppressed he should be helped (against oppression).[8]

Also, Aisha reported: “Once the camel of Safiyyah bin Huyayy (the wife of the prophet) became ill. Zainab (another wife of the prophet) had a spare camel. The prophet (pbuh) asked Zainab to give her spare camel to Safiyyah. But Zainab said: ‘Should I give my camel to that Jew?!’ Hearing this, the prophet became angry with her and did not visit her for 3 months!”[9] This shows the Prophet’s intolerance to tribalism!

All these show that partisanship, ethnic egocentrism or tribalism has no place in Islam. It is therefore necessary for all hands – parents, teachers, religious leaders, traditional rulers, civil societies, NGOs and of course, the government – to be on deck, to nip this challenge in the bud before it leads to a catastrophe.

The Prophet Muhammad (pbuh) said: “Do not be people without minds of your own, saying that if others treat you well you will treat them well, and that if they do wrong you will do wrong; but accustom yourselves to do good if people do good, and not to do wrong if they do evil”.[10]

He (pbuh) also said, “Do you know what is better than charity and fasting and prayer? It is keeping peace and good relations between people, as quarrels and bad feelings destroy mankind”.[11]

May Allah continue to bless our nation and keep us together as one – Ameen!