Should The Voice Of A Woman Be Heard By Men? 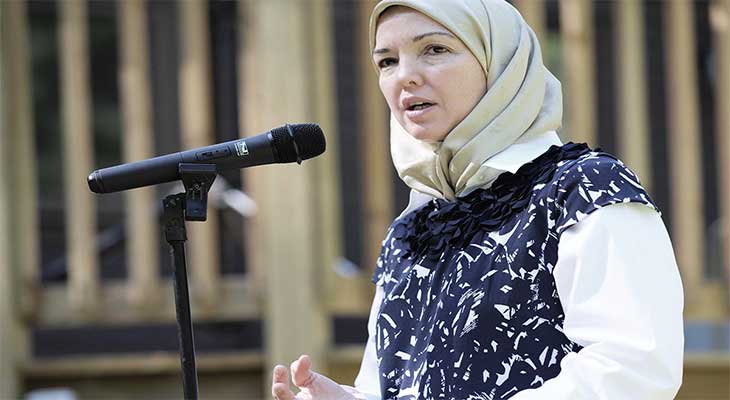 There is no indication whatsoever either in the Qur’an or in the Hadith of the Prophet (p) in support of this view. On the contrary, the Prophet (p) used to listen to the voices of women other than his wives. In Qur’an 58:1 the case is mentioned of a woman who came to lodge her complaint, and a revelation came to him about it.

It is an obvious proof that the Prophet (p) never considered women’s voices as part of their “awrah”. Women are not prohibited from speaking. However they should not speak in a tone that could be seductive as Allah indicated in Qur’an 33:32 “… be not over-soft in your speech, lest any whose heart is diseased should be moved to desire (you), but speak in a kindly way.”

This command definitely cannot be for the husband and wife since it is not haram i.e. forbidden, to speak to each other in a seductive tone. It applies to men who are unlawful to her. Likewise, women are not prohibited from raising their voices.

An example is the case of the girl who complained about being forced into marriage by her father (Hadith – Ibn Majah, also Bukhari Vol.2:95, etc.) In fact, Al-Baihaqi further reported that A’isha (RA) used to call Adhan, and lead women in congregational prayer. Accordingly the Shafi’i and Hanbali Schools consider the Adhan (Call to Prayer) of women as permissible (Fiqh-ul-Sunnah, Vol.1, p.113).

This is provided that the women hold their congregational prayer separately from men, and that it does not cause any undesirable consequences. This is an additional piece of evidence for the permissibility of women’s speaking aloud.

Prohibiting women speaking in church is a teaching found in Christianity as it is observed in 1 Corinthians 14:34-35 that: “As in all the Churches of the Saints, the women should keep silence in the churches. For they are not permitted to speak, but should be subordinate, as even the law says.

If there is anything they desire to know, let them ask their husbands at home. For it is shameful for a woman to speak in church.” This is however not found in Islam. During the time of Umar’s Caliphate a woman in the mosque publicly disagreed with him on a legal ruling. He accepted her correction and did not reprove her for speaking in public in the mosque.

« What Is Purdah And Does Islam Require Segregation Between Gender?
Are Women Allowed To Come Into The Mosque? »