Are Women Allowed To Come Into The Mosque? 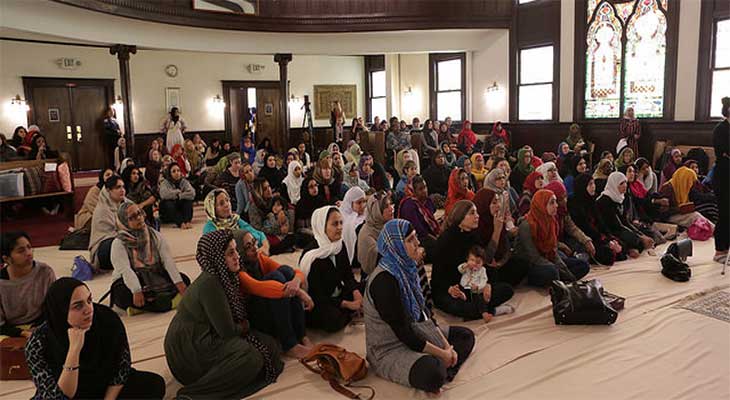 Contrary to the observed practices in some Muslim communities in preventing women from attending mosque directly or indirectly by not making provision for them, the Sunnah of the Prophet (p) made it clear that women are allowed and even encouraged to attend congregational prayers, to benefit from lectures or for social integration.

Hafsah, the Prophet’s wife (p) is reported to have said: “We used to forbid young girls from going out to attend the Eid prayers. But a woman came to visit and stayed in Qasr Bani Khelf, and told about her sister, whose husband had participated in twelve military campaigns of the Prophet (p) of which her sister took part in six. She said: “We treated the wounded and looked after the sick.”

I asked the Prophet (p): Would there be any harm in not going out if we do not have julbabs (wide loose gowns)? The Prophet (p) replied: “Let her friend lend her a julbab so that she may attend the blessed occasion and the preaching of Islam”. Hafsah went on: “When Umm Salma came I asked her (to confirm): “Did you hear the Prophet (p)?” She replied “Yes, indeed I heard him say: All girls, young secluded, or in their monthly periods should go out to attend the Eid congregation and witness the blessedness and publicity of social Islam. The menstruating ladies should however stand by during the prayer”. Hafsah asked: The menstruating ladies too? She replied: “Don’t you see that they attend the congregation in Arafat for pilgrimage?” (Bukhari)

The Prophet (p) is reported also to have said: “Don’t stop women from going to mosques at night”. A son of Abdullah bin Umar, on hearing this statement, said to his father: “We would not allow women to go out of the house at night for fear of any abuses.” Ibn Umar reprimanded his son: “I say the Prophet (p) said so, and you still say you won’t allow it” (Muslim).

From the foregoing, it is clear that the Prophet’s directive was to encourage women to go out publicly to the mosque, even at night, and to attend and offer Eid prayers. It is also recognized that pilgrimage (Hajj), despite its displacements and thick crowds, is a function performed in common by men and women.

Furthermore, educational assemblies were at the Prophet’s time attended by men and women jointly. The Prophet (p), in teaching the Muslims used to address men and women together even where he was giving instructions relating to conjugal matters. Once he was lecturing Muslims after prayer about tales they would tell the morning following their conjugal activities.

Abu Hurairah is quoted to have reported this as follows: “The Prophet (p) had just finished his prayer with us, when he directly turned and asked us to keep sitting, and then asked: ‘Is there amongst you any who would shut doors and draw curtains when he approaches his wife, but would later go out and tell everybody how he did so and so?’ All men present kept silent.

Then the Prophet (p) turned to the ladies and said: ‘Does anyone of you openly discuss her conjugal matters with other women?’ A young lady in the audience, when she heard this, knelt up on one knee and craned her neck so that the Prophet (p) might see her and hear her speak. She said: “Yes by God, all men discuss these matters among themselves and so do all women, too”.

The Prophet (p) said: “Do you know whom someone like that may be compared to? Indeed it is like a Satanic couple who meet on a high street and indulge their sexual desire in full view of the people” (Ahmad, Abu Dawud, and Al-Bazzar).

The Hadith about the woman who corrected Umar at a public forum in the mosque over placing a limit on a woman’s dowry is quite in place. Umar admitted his mistake by respecting the opinion of the lady who quoted from the Qur’an:

“Even if you had given one of them (wives) a whole treasure for dowry take not the least bit back. Would you take it by false claim and a manifest sin” (Qur’an 4:20).

Umar then returned to the pulpit and declared: “O people! I had restricted the giving of more than four hundred dirhams in dowry. Whosoever of you wishes to give in dower as much as he likes and finds satisfaction in so doing may do so.”

Nobody criticized the woman for being present at the gathering or for speaking out in public her correction to the Caliph.

However, there are also some ahadith being referred by some scholars which discourage women from praying in the mosque, some of which are:

Reported by Yahya from Aisha saying “If the Messenger of Allah (p) had seen what the women have invented he would have prevented them from visiting the mosque (for prayer)” (Abu Daud).

Analyzing these ahadith, the first can be seen as more of placing emphasis on place rather than an outright prohibition, that is, it is preferable, if she is praying alone and not in congregation, to do it in her room. The second one is a criticism of immoral manners some women of the time were exhibiting.

However, this can not be generalized just as the Prophet (p) himself did not but on the contrary guided women on how to behave when coming to the mosque. He urged them not to perfume themselves (reported by Abu Hurairah) and to dress modestly, as quoted above.

He also reserved a separate door for them (reported by Umar Ibn al-Khattab) and would delay leaving the mosque so as to allow women to leave first.

There is a clear contemporary need for women to attend mosques, for example: the increase in their knowledge and participation in the affairs of ummah; for social solidarity; the needs of the many new female converts; for peace and concentration in prayer; and for punctuality.

Therefore there is need for women to be encouraged to attend the mosque while proper Islamic moral values should be adhered to in order to facilitate concentration on the objectives for which the mosque is meant, for both male and female worshippers.

« Should The Voice Of A Woman Be Heard By Men?
The Hereafter – Existence and Nature »