Introduction to Ethics of Disagreement in Islam 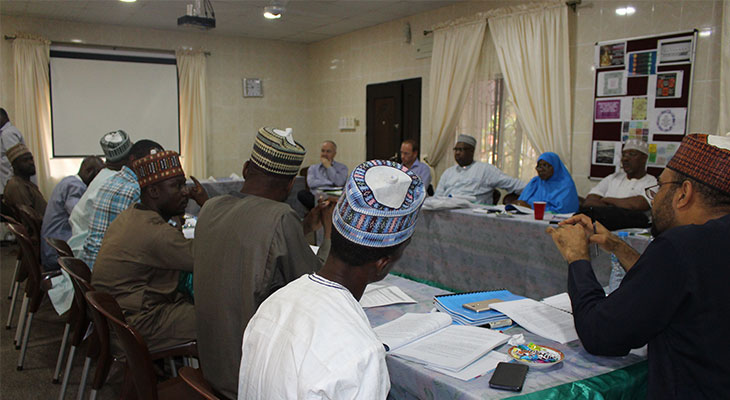 In clarifying some areas of Islam for Muslims, it is important to understand that the Qur’an and the Sunnah (way; or practices, manner and teachings) of the Prophet Muhammad (r) are the highest authorities on Islam and if anything contradicts them, it should be rejected as an unacceptable bid’a[1] (innovation) or heresy.

However, provision exists for the interpretation and application of the Qur’an and Sunnah with the aid of reasoning to new or changing circumstances. This is called Ijtihad,[2] and must be carried out by a person who is qualified to do so, called a Mujtahid.[3]

In the Sunni world, many Mujtahidun (plural of Mujtahid) have risen to popular recognition, but none of them ever considered themselves as infallible.

They all (along with many others) are in agreement on the major tenets of Islam, such as the five pillars, articles of faith, number of raka‘ah for each obligatory Salat, etc.

However, there are some differences of opinion among the Mujtahidun on some aspects of Islam. This is natural and should be expected since the scope of Shari’ah allows for varying rulings in many cases; and since the Mujtahidun were all different human beings, they exercised the reasoning power Allah had given them in different ways to produce some divergent deductions.

They also utilised different sources of information in deriving some legal precedents. For instance, some of them had access to some Ahadith (sayings or narrated actions of the Prophet) and Aathaar (sayings of the Companions or their Followers) that others did not have.[5]

In some cases, they were acquainted with contrasting hadith or had different ways of understanding the same verse or hadith[6], and this would influence the application of their reasoning.

A science of Islamic jurisprudence called Usul al-Fiqh (the ‘Roots’ of Jurisprudence) was developed to provide consistent methodologies for resolving ‘apparent contradictions’ in the Shari’ah’s source texts, while minimising mistakes in the derivation of rulings and ensuring fidelity to the ethos of Islam. Abdal Hakim Murad (1999) notes that:

Like the other formal academic disciplines of Islam, this was not an innovation in the negative sense, but a working-out of principles already discernible in the time of the earliest Muslims.

In time, each of the great interpretive traditions of Sunni Islam codified its own variation on these ‘roots’ (usul), thereby yielding in some cases different ‘branches’ (furu‘, i.e. specific rulings on practice).

It is important to stress, however, that the areas of similarities among the schools of Jurisprudence (singularly called Madhhab in Arabic) seriously outweigh the areas of differences, and a tradition of mutual respect between scholars of each school has prevailed throughout the centuries of Islamic history.

Some scholars suggest that individual Muslims should hold to the teaching of only one Mujtahid or follow a particular Madhhab[7].

Some also suggest that one should accept the most popular opinion among a number of Mujtahidun, but that it should also be the opinion that is closest to the Qur’an or Sunnah.[8]

In cases where the Qur’an and the Sunnah support both opposing opinions, one should, as the Prophet (r) advised, choose the one that he feels most sincerely and intuitively comfortable with, and is ready to meet Allah with on the Day of Judgment.

Situations may occur where none of the four great Schools of Jurisprudence have a clear ruling over a problem, thereby making it incumbent upon contemporary scholars to provide possible alternative answers based on the objectives of Shari’ah, available information on the issue at hand and juristic precedents on similar issues, as well as exposure to up-to-date research, and broad understanding of the societal impacts of various alternatives.

It is pertinent that before young people embark on argument or debate over any issue, the relevance of the issue in question must be ascertained; in other words, ‘is it worth the argument?’

It is important that tolerance and respect is maintained for contrary opinions as valuable, most especially if they are derived from the Qur’an or the Prophet’s Sunnah. If an opinion is presented by somebody who has confidence in a particular Mujtahid who derives conclusions from the recognised methodology of a madhhab, such an opinion is not necessarily wrong.

It should be reiterated here that none of the past Mujtahidun considered themselves as infallible and they all held great respect and reverence for each other.[9]

As far as differences of opinion on jurisprudence are concerned, young people must remember that brotherhood (or the unity of Muslims) in Islam is “FARD” (i.e. obligatory).

An obligatory aspect of Islam (Muslim brotherhood) must not be sacrificed for something less important (e.g. keeping hands either by the side or on the chest during Salat). It is, therefore essential that legitimate differences of opinion should not be allowed to lead to disunity.

[8] Allah also praises “those who listen to others and goes with the best opinion” (Qur’an 39:18)

« Should One Say Salaam To Non-Muslims?
Sheikh Nuruddeen Lemu in Sydney »